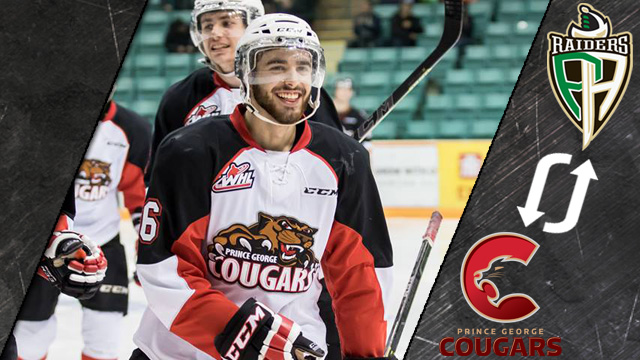 Prince Albert, SK – The Prince Albert Raiders announced Friday that the club has acquired forward Cal Babych from the Prince George Cougars in exchange for a conditional seventh round draft pick in 2016.

Babych, a product of North Vancouver, BC is entering his third Western Hockey League campaign. Last season, split between the Calgary Hitmen and Cougars, Babych collected seven goals and eight assists for 15 points in 52 contests. In 93 career WHL regular season games, the 18-year-old has 10 goals and 11 assists for 21 points.

“We felt very fortunate that a player of Cal’s ability was available,” said Raiders general manager Curtis Hunt. “We are excited to get him to Prince Albert and get him acclimated with the team.”

The five-foot-11, 195-pound winger was originally selected by the Hitmen in the fourth round, 84th overall in the 2012 Western Hockey League Bantam Draft. Cal is the son of long-time National Hockey League player Dave Babych.