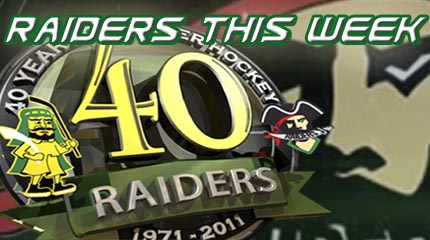 entertain the Tri City Americans Tuesday at 7:00 PM at the Art Hauser Centre before

departing for their longest road trip of the season, 6 games through the Western Hockey

Drew Wilson, voice of the Raiders is joined by Kalen Kovich as co-host for the weekly

season.  Brendan Shinnimin of the Americans has 2 goals and 9 assists for 11 points and is

tied for the WHL points lead with Brendan Gallagher of the Vancouver Giants.  They are

assists.  It is the only visit of the US Division Americans in 2 seasons.

Watch all road games at JT’s

televised live in JT’s Pub in the Ramada South Hill.