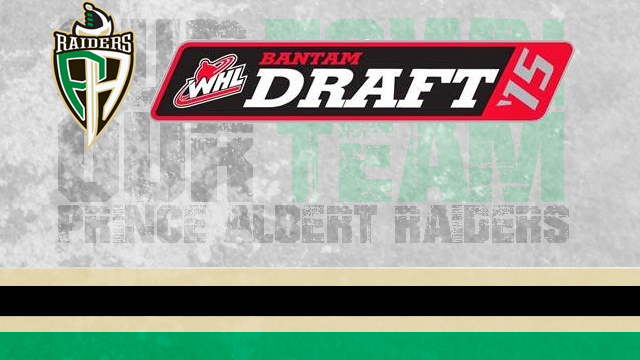 Of the 10 players drafted by the Raiders on Thursday in Calgary, five came from Alberta. Two players were taken from both Saskatchewan and Manitoba, while Prince Albert also grabbed one player from Minnesota. The Raiders selected seven forwards and three defencemen.

“We went into the draft looking to add some skill and speed to our line-up and we certainly did that,” explained Raiders Director of Player Personnel Dale Derkatch. “Our top three picks were all top scorers in their league. In the mid-rounds we got some defenceman who we feel can compliment, be physical and move the puck, as well as some forwards who can play different roles and play a big game.”

Later in the first round, 21st overall, Prince Albert once again dipped into the Saskatchewan talent pool and took pivot Carson Miller from the Yorkton Terriers AA team. Miller led the entire Saskatchewan Bantam AA Hockey League in scoring. During the regular season, the five-foot-nine scorer collected 49 goals and 58 assists for 107 points in 31 games.

“We wanted the best players available and them being from Saskatchewan is a big bonus,” said Derkatch. “They know the province, they know Prince Albert, and are skilled players who are excited to play here.”

In the second round, 28th overall, the Raiders drafted Spencer Moe from Calgary, Alberta. During the 2014-15 season, Moe dressed for the Calgary Bisons where he netted 21 goals and 52 assists in 31 contests. The five-foot-five forward also played a pair of games with the CBHA Blackhawks Minor Midget AAA team where he scored five goals and an assist for six points.

“Spencer is a nifty and fast player who is very dynamic. He can score and has some of the best hands in the draft,” said Derkatch.

The Raiders stayed in Calgary for the third round and selected defenceman Tyler Lowe with the 64th pick. Lowe spent the 2014-15 season with the Calgary Northstars and played 27 games, scoring three goals and 12 assists for 15 points. He also took the ice with the CNHA Blazers Minor Midget AAA squad seven times, notching an assist.

“Tyler is a steady defenceman and a very good puck mover. He can make an excellent first pass,” noted Derkatch.

“Lane is a swift skating defenceman who can really carry the puck out of the zone. He is very fast and can be a very exciting player to watch,” said Derkatch.

With the 116th overall pick, the Raiders selected another defenceman from the Calgary Northstars – this time Chase Felgueiras. The six-foot blue liner played 31 games with the Northstars, picking up three markers and six assists for nine points. Felgueiras also played four games with the CNHA Blazers Minor Midget AAA team where he collected an assist.

“Chase is a big, steady, stay at home defenceman. He is very physical, can make a good first pass, and is hard to play against,” explained Derkatch.

Prince Albert drafted forward Garrett Clegg with the 138th selection. A native of Sturgeon County, AB, Clegg spent the 2014-15 season with the St. Albert Sabres Bantam AAA team where he dressed in 32 contests, scoring 26 goals and 13 assists for 39 points. He also saw time with the St. Albert Flyers Minor Midget AAA squad where he scored two goals and three helpers for five points in eight games.

“Garrett is a smooth right-handed shooting winger. He put up some very good numbers this year is a very reliable player who is good around the net,” said Derkatch.

With their second pick of the seventh round, 142nd overall, the Raiders selected Justin Nachbaur from Cross Lake, Manitoba. A six-foot-two forward, Nachbaur played this past season with the Winnipeg Warriors Bantam AAA team. In 30 games, he scored 23 goals and 22 assists for 45 points.

“Justin is a big power forward who is very physical and plays well in the dirty areas. He will play in front of the net or in the corners and has a very good shot,” explained Derkatch.

The Raiders chose their lone American in the 2015 WHL Bantam Draft with the 160th pick in the eighth round, grabbing centre Gavin Hain. A Grand Rapids, MN product, Hain played for the Grand Rapids Thunderhawks Bantam AA team where he netted 67 goals, 52 assists for 119 points in 52 games.

“Our U.S. scout really wanted to take Gavin and thought he is a very good player. He is a very dynamic centreman who plays an all-around game,” noted Derkatch.

With the 204th pick, the Raiders selected Yauheni Astrouski. A 1999-born player originally from Belarus, Astrouski was eligible for the draft as an older player after moving to Canada this past year. Playing the 2014-15 season with the SSAC Bulldogs Minor Midget AAA team out of Edmonton, the six-foot forward registered 18 goals and 30 assists for 48 points in 37 games.

“Gino is a good skater with some good hands and is a year older than the rest of the players. He is a skilled forward who could have a shot next year,” said Derkatch.