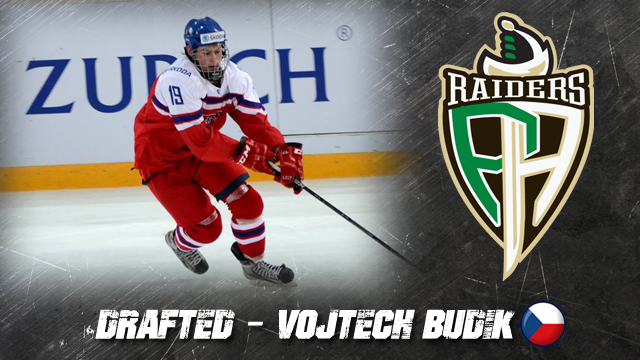 The Raiders selected the six-foot-one, 190-pound rearguard with the 17th overall pick in the annual draft, which includes teams from the Ontario Hockey League, Quebec Major Junior Hockey League, and Western Hockey League.

“Vojtech was one of the top players on our list and is an excellent skater with the poise to carry the puck and make good decisions,” said Raiders Director of Player Personnel Dale Derkatch. “It was our goal to select the best player available and we believe we have done that with this selection.”

The Pardubice, Czech Republic native played the 2014-15 season split between HC Pardubice’s Under-18 and Under-20 teams. With the U-18s, Budik scored three goals and added nine assists for 12 points in 12 games. At the U-20 level, he recorded five assists in 19 games.

Budik played for the Czech Republic at the Under-18 World Championship and at the European Youth Olympic Festival where he won a silver medal. In eight international games last season, Budik netted a pair of goals and four assists for six points.

Budik becomes the third-straight Czech player to be selected by the Raiders in the CHL Import Draft and 10th overall.