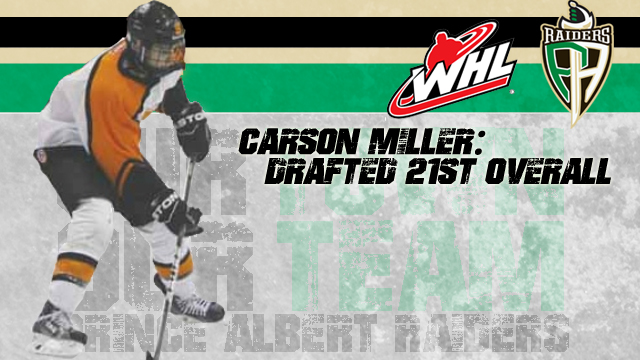 Prince Albert, SK – The Prince Albert Raiders are pleased to announce the selection of centre Carson Miller with the team’s second selection, 21st overall, in the first round of the 2015 WHL Bantam Draft.

Miller, a 15-year-old from Yorkton, Saskatchewan, played the 2014-15 campaign with the Yorkton Terriers Bantam AA squad where he posted 49 goals, 58 assists for 107 points in 31 games. In nine playoff games, he added seven goals and 14 helpers for 21 points. Miller’s point totals in both the regular season and the post season led the Saskatchewan Bantam AA Hockey League.

“Carson is a very crafty and slick centreman,” said Raiders Director of Player Personnel Dale Derkatch. “He is very strong on the power play and has great patience with the puck. He can also score you a big goal when you need one.”

Miller was the Raiders’ second selection from Saskatchewan and was one of three players taken in the first round from the province.