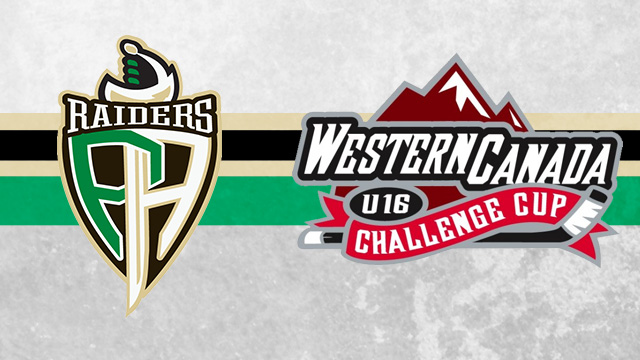 Prince Albert, SK – The Prince Albert Raiders would like to congratulate five listed players who have been named to rosters for the 2015 Western Canada U16 Challenge Cup.

The Western Canada U16 Challenge Cup will feature the highest-rated players in the under-16 age category from the provinces of British Columbia, Alberta, Saskatchewan and Manitoba. The tournament will be a four-team round robin format and is the first step in Hockey Canada’s Program of Excellence for players. Additionally, the event assists the four provincial hockey associations in evaluating top prospects for future high performance programs.

The Raiders’ first round picks from the 2015 Western Hockey league Bantam Draft will represent Team Saskatchewan. Cole Fonstad is currently playing for the Moose Jaw Generals, while Carson Miller is dressing for his hometown Yorkton Maulers, both in the Saskatchewan Midget AAA Hockey League.

In Alberta, Spencer Moe has been named to his provincial squad. The Raiders’ second round pick is playing this year for the Calgary Buffalos in the Alberta AAA Midget Hockey League.

Lane Kirk and Justin Nachbaur have both made Team Manitoba. Kirk, who signed with the Raiders after an impressive training camp, is a member of the Parkland Rangers, while Nachbaur is with the Norman Northstars. Both players are in the Manitoba Midget AAA Hockey League.

This year’s event will take place from Wednesday October 28 to Sunday November 1 at the Markin MacPhail Centre (WinSport) in Calgary, AB.

The Prince Albert Raiders conclude their four-game home stand on Tuesday, October 6 when they take on the Kootenay Ice. Game time is 7:00 PM. The Raiders embark on their US Division road trip on Wednesday as they get set to play six games in eight nights, starting on Saturday, October 10 versus the Seattle Thunderbirds.