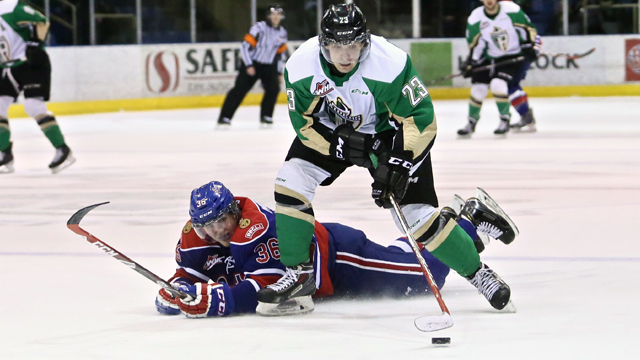 Regina, SK – Three goals by the Regina Pats in the first and second period was the difference as the Prince Albert Raiders fell 7-4 in their first game of the pre-season on Friday Night at the Co-operators Centre.

Scoring goals in bunches, the Pats were able to pull ahead with three goals in under five minutes during the first period and three more in under three minutes in the middle frame. Colton Kroeker (2g, 1a), Jake Leschyshyn (1g, 2a), and Jake Elmer (2g, 1a) each tallied three points to lead Regina.

Making the start in his hometown, Curtis Meger appeared in his first WHL pre-season contest. The former Regina Pat Canadian stopped nine of 15 shots in 30 minutes of action. Ian Scott completed the final 30 minutes of the game and turned away 10 of 11 shots.

Jordan Hollett made 33 saves on 37 shots for the Pats.

Prince Albert falls to 0-1-0-0 in the pre-season, while Regina improves their record to 1-1-0-0. The Raiders are on the ice again tomorrow afternoon at the Co-operators Centre in Regina as they take on the Calgary Hitmen at 2:00 PM.