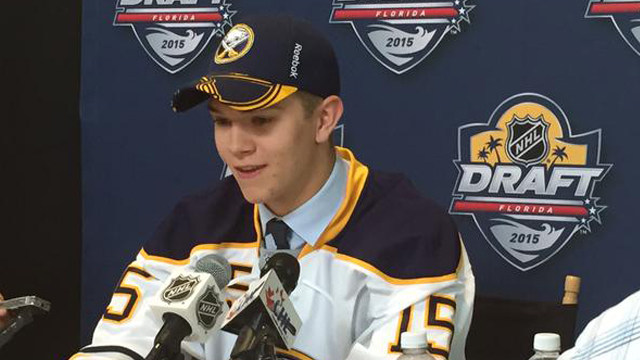 Prince Albert, SK – The Prince Albert Raiders are proud to announce that defenceman Brendan Guhle was selected by the Buffalo Sabres in the second round with the 51st overall pick on Saturday at the 2015 National Hockey League Draft in Sunrise, Florida.

Guhle recently completed his second season with the Raiders and dressed for all 72 games, compiling five goals and 27 assists for 32 points. The Sherwood Park, Alberta native was ranked 56th among North American skaters by NHL Central Scouting and finished in the top-10 of seven categories at the NHL Combine.

“It is an absolute honour to be selected by an NHL team and we are very proud of Brendan,” said Raiders Director of Player Personnel Dale Derkatch. “This is a huge accomplishment for him, his family, and everyone who has helped him get to this point in his career.”

In his two-year Western Hockey League career, Guhle has played in 123 games with five goals and 37 assists for 42 points. The six-foot-two, 186-pound defender has also seen action in five playoff games where he has a goal and one assist for two points. In 2014, Guhle was a member of Canada’s Team Pacific at the World Under-17 Hockey Challenge where he won a silver medal.

Guhle was originally chosen by the Raiders in the first round, third overall, in the 2012 WHL Bantam Draft. He becomes the eighth Raider to be selected in the NHL Draft in the last six years.