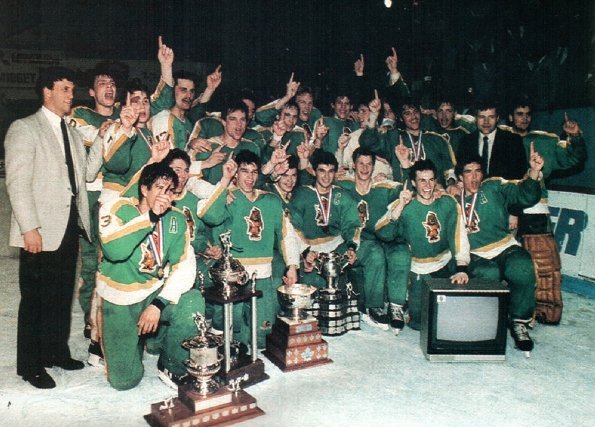 The Raiders started in the 1971-72 campaign en route to becoming one of the most successful Tier II franchises in Canada, playing in the Saskatchewan Junior Hockey League (SJHL). Prince Albert won the Tier II national championship, four times in a six-year span from 1977 to 1982. The Raiders also won 7 straight Anavet Cups between 1976 until 1982 against various champions of the Manitoba Junior Hockey League.

In 1982, the city of Prince Albert was granted a WHL Franchise, as the Raiders moved up into the top echelon of junior hockey.

Just three years later, the Raiders were the best team in the WHL. Lead by team captain Dan Hodgson, the team achieved the best regular season record in the WHL of 58 wins, 11 losses and 3 ties. The Raiders defeated the Calgary Wranglers, Medicine Hat Tigers and the Kamloops Blazers in the WHL playoffs en route to a WHL Championship.

In 2019, the Raiders claimed their second Ed Chynoweth Cup as WHL Champions. After claiming the Scotty Munro Memorial Trophy as WHL Regular Season Champions with a record of 54 wins, 10 losses, 2 overtime losses, and two shootout losses, the Raiders defeated the Red Deer Rebels (four-game sweep), the Saskatoon Blades (four games to two), and the Edmonton Oil Kings (four games to two) en route to a WHL Championship Series matchup with the Vancouver Giants. The Raiders bested the Giants four games to three, winning Game 7 in 3-2 in overtime at the Art Hauser Centre. Goaltender Ian Scott was named the WHL Playoffs MVP  after posting a 16-6-1 record with a 1.96 goals-against average and five shutouts.

The Raiders have produced a plethora of NHL players, including being the only team in the modern WHL era with two first-overall NHL Entry Draft Selections in Mike Modano (1988) and Chris Phillips (1996).