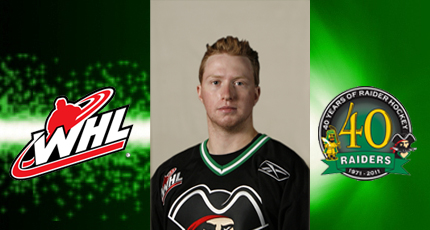 It was recently announced by WHL Commissioner Ron Robison announced that a total of 275 graduate players have been awarded WHL Scholarships for the 2010-11 academic year, with 102 being active players for the seven Canada West men’s hockey teams.

BUTLER, who also won the February 2010 award, posted a 2-2-1 record in November, with one shutout, a sparkling 1.12 goals against average (GAA) and an impressive .966 save percentage. The third-year High River, Alberta product now has a 2010-11 record of 4-4, with a 1.74 GAA and one shutout in nine Canada West appearances.

BUTLER becomes the 22nd monthly winner for Calgary, one of 19 different Dinos to win the prize since it was first awarded in October 1989. The soon-to-be 23-year-old Social Sciences student was already the most recent Dino to win the award, with forward Reid Jorgensen being the last different U of C student-athlete to claim honours, in February 2008.