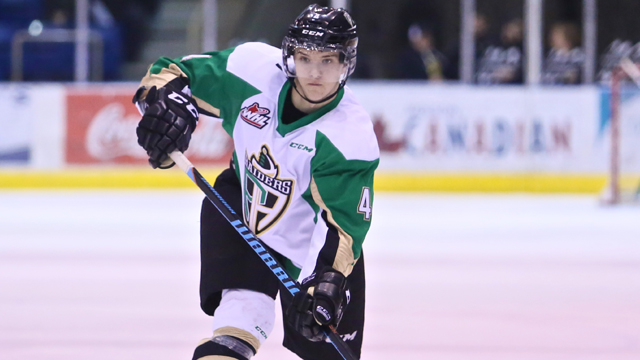 When the 2015 National Hockey League Entry Draft begins on Friday Night in Florida, few prospects will be as ready for it as the Prince Albert Raiders’ Brendan Guhle.

At this time one year ago, he was in Philadelphia when his agent brought him to watch the 2014 draft and see the process firsthand. Now, after recently completing his second season in the Western Hockey League, the smooth skating defenceman is the Raiders’ top ranked prospect and could be one of the most notable sleepers for the 2015 NHL Entry Draft.

“It was a really cool experience,” said Guhle of his time at last year’s draft. “I was even nervous just sitting there watching it. I am not really sure what it is going to be like there this weekend, my nerves will probably be pretty fired up.”

In 72 games last season, the six-foot-two, 186-pound blue liner compiled five goals and 27 assists for 32 points with 36 penalty minutes. Apart from his skating, Guhle has also caught the attention of teams because of his fitness. At the NHL Combine earlier this month, Guhle finished in the top-10 of seven categories – matched only by consensus second overall pick Jack Eichel.

While those results could add a significant boost to his draft stock, Guhle insists it has not changed his mindset going into the weekend.

“I always knew I was a pretty fit guy and that I would test well, so it didn’t change much for me,” he explained. “Teams have been pretty busy with free agency, but I am sure it helped at least a little bit.”

On Friday and Saturday, Guhle will be with his parents, grandparents, and brother as he aims to become the eighth Raider drafted in the past six seasons. Nick McBride, Reid Gardiner, Matteo Gennaro and Rylan Parenteau could also hear their names called. The moment would be extra special for Gardiner, who is in his second year of draft eligibility.

“Reid definitely has a great shot, he has a great work ethic and deserves to be drafted,” said Guhle. “They all have good chances. It only takes one team to like you.”

Every expert seems to have a different read on Guhle. The Sherwood Park, AB product finished 56th on NHL Central Scouting’s North American Skaters ranking. One of Guhle’s highest rankings came from TSN’s Bob McKenzie who ranked the rearguard 70th overall. His list is based on input from various scouts around the NHL.

“It would be pretty cool to go to the same team,” said Guhle when asked about his teammates.

“I would be happy to end up in any situation; I am just excited to see where it is going to be.”