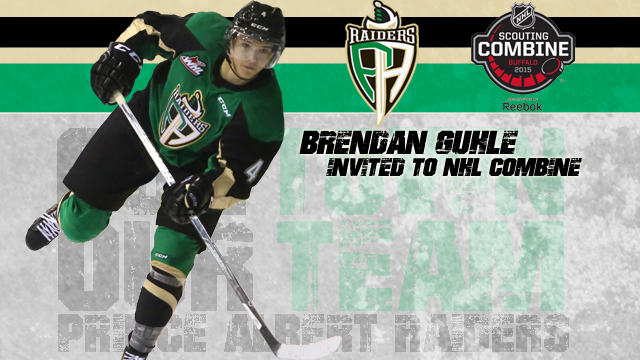 Prince Albert, SK – Prince Albert Raiders blue liner Brendan Guhle has been invited to the 2015 NHL Scouting Combine, which will be held in Buffalo, NY from June 1-6.

Guhle is one of 120 draft-eligible players anticipated at the combine. He is coming off his second season with the Raiders, where he collected five goals and 27 assists for 32 points in 72 games. In 123 career games with Prince Albert, Guhle has five goals and 37 assists for 42 points.

“This is a great opportunity for Brendan in the draft process leading up to June,” said Raiders head coach Marc Habscheid. “We wish him the best and know he will represent the Raiders well.”

A product of Sherwood Park, AB, Guhle was selected third overall by Prince Albert at the 2012 WHL Bantam Draft. The six-foot-two, 185-poud defender won a silver medal with Canada’s Team Pacific at the 2014 World Under-17 Hockey Challenge. In April, Guhle was ranked 56th among North American Skaters by NHL Central Scouting.

The Scouting Combine will give amateur scouts and general managers an opportunity for 1-on-1 interviews with the prospects at the First Niagara Center from June 1-5. The medical examinations of each player will take place June 4, and the majority of the fitness testing will take place June 6 at the HarborCenter.