Five Raiders off to NHL Camps 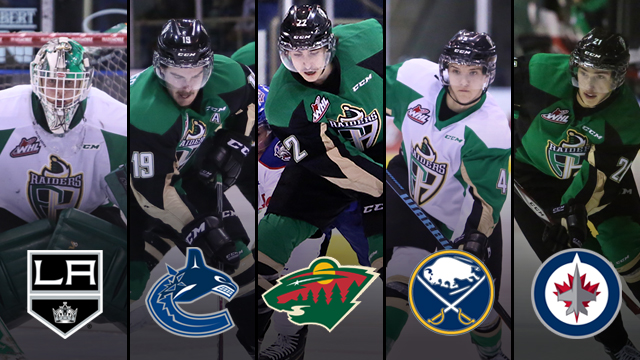 Hunter Warner and Brendan Guhle, who have each signed NHL entry-level deals, will attend training camp with the Minnesota Wild and Buffalo Sabres respectively. Like Guhle, Matteo Gennaro was selected in the 2015 NHL Draft and will attend his first NHL camp with the Winnipeg Jets. Two Raiders will also attend camps as invitees. Reid Gardiner will take the ice at Vancouver Canucks camp, while Nick McBride travels to California and will skate with the Los Angeles Kings.

Born in Maple Ridge, BC, McBride played a career-high 37 games in 2014-15, posting a 13-18-1 record with two shutouts. The 18-year-old puck stopper ended his second year in the WHL with a 3.41 goals-against average and a 0.895 save percentage. This spring, McBride was named the 2015 WHL Scholastic Player of the Year and the winner of the Daryl K. (Doc) Seaman Memorial Trophy.

A Humboldt, SK native, Gardiner is coming off a breakout season with the Raiders where he led the team in scoring. In 67 games, the five-foot-eleven, 188-pound scorer tallied 34 goals and 30 assists for 64 points. Last summer, Gardiner earned a development camp invite from the Minnesota Wild and was brought back in September to play with them at the annual Traverse City Prospects Tournament.

Guhle arrives at his first NHL camp after being taken in the second round, 51st overall, in the 2015 NHL Draft by the Sabres. Last season, the Sherwood Park, AB product scored five goals and 27 assists for 32 points in 72 contests. In July, Guhle signed his first NHL contract with Buffalo.

Coming off an injury-riddled 2014-15 season, Warner will attend Minnesota camp for the second time. The Eden Prairie, MN product signed with the Wild at training camp last fall and went on to play in 24 games with the Raiders where he recorded three assists and 25 penalty minutes.

The Prince Albert Raiders return to the Art Hauser Centre on Friday, September 11, for their first pre-season game at home. Free admission is being offered to the game with food donations being accepted in the Johnny Bower Lobby.