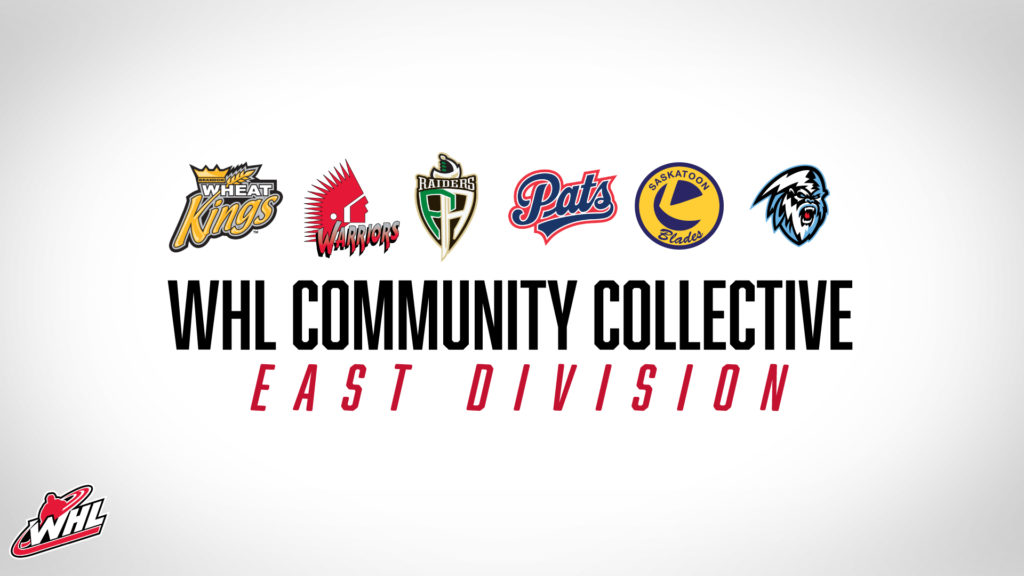 While playing hockey and academic endeavors are priorities for Western Hockey League players, community interaction and involvement are also important prerogatives that often go unrecognized. In the WHL Community Collective feature, we will highlight each team in the WHL, by division, to recognize different initiatives in their respective communities.

In this week’s #WHLCommunity spotlight, the East Division is featured:

The Brandon Wheat Kings were active event when the weather was brisk this season hosting various skate and sign sessions. One program that has played a big part in the community has been the Wheat Kings Luncheon in support of school “Safety Patrol Units.”

The program is in coordination with Subway and the Brandon Police service. Once a month, patrol members from one Brandon school got the chance to enjoy lunch with members of the Wheat Kings.

The School Patrol Luncheon program recognizes kids who volunteer their time in rain, snow or shine to help keep the streets safe for kids in the community. Part of the program also provides the Wheat Kings and the Brandon Police Service a forum to relate important safety messages to Brandon and area students.

This season, over 500 school patrollers from Brandon and the surrounding area attended the Wheat Kings game against the Regina Pats on November 23, 2019. The School Safety Patrol Program has become a successful and respected safety program throughout western Manitoba.

Hard to believe but it’s already the final School Patrol luncheon of the season! Thanks to @subwaycanada, @brandonmbsd, Brandon Police and of course all the Patrols who keep their classmates safe! @neithansalame32 @colerein_

“Being in a smaller city, it is very important for us to be involved in the community, and we value the opportunity to work with these athletes.

“Having the ability to connect and engage with their team is something our team loves and continuing to build a relationship with Moose Jaw Special Olympics is something we very much look forward to,” said Warriors forward Calder Anderson.

Throughout the season, Warriors players take part in various activities with Special Olympic athletes such as floor ball games and workouts. On February 1, 2020, Moose Jaw hosted the Special Olympics Floor Hockey Tournament inviting seven team’s from around Saskatchewan to compete.

Once a month, Moose Jaw honours a ” Special Olympics Team of the Month,” at one of the Club’s home contests. The athletes selected receive a personalized Warriors Jersey and take part in a ceremonial face off. 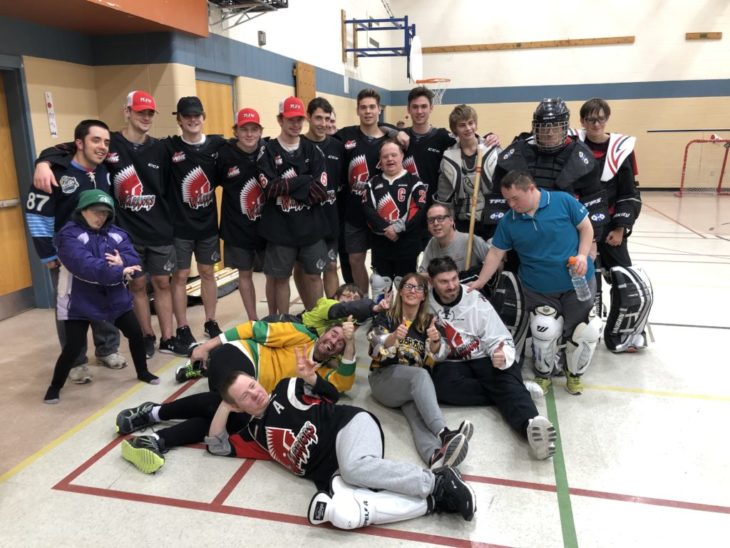 This season the Raiders hosted the Club’s first “This Girl Can,” game dedicated to celebrating young girls and women in sport, business, and community groups.

Before the evening commenced, players from around the community had the opportunity to take the to the ice, participating in various drills with University of Saskatchewan Huskies alumni Morgan Willoughby and Jessica Vance. Also hosting the on-ice session were drill coaches from Hockey Canada, U SPORTS and the Prince Albert Midget AAA Northern Bears.

After the skate, there was a featured speaking engagement that included community leaders, Prince Albert minor hockey alumni and members of the AAA Bears team. Throughout the evening, various speakers helped lead a Q & A period aimed at inspiring girls to excel in the pursuit of their goals on and off the ice.

“The 2020 “This Girl Can” game night was a great start to what we hope becomes an annual event positioned around International Women’s Day,” said Cliff Mapes, Raiders Executive Director of Business Operations. “I believe this event will continue to grow with the incredible support we have received from our corporate partners, the City of Prince Albert and local minor sport organizations.” 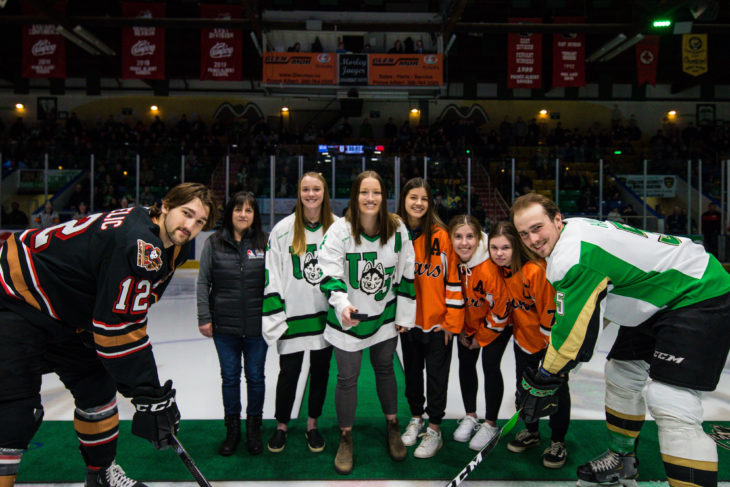 Thanks to all the groups who came out to last night’s inaugural “This Girl Can” Night! Check out the full gallery on the Raiders App! 📸 @apollomultimedia11

The Regina Pats host post-game skates with kids who attend the games throughout the season,. This opportunity gives kids and parents the chance to interact with the players and get to know who is lacing up for their local club. After the game, the kids and their parents get to lace up and skate around at the Brandt Centre where they are shortly there after joined by members of the Pats.

Pats defenceman Kyle Walker notes the impact and importance of staying active in the community. Walker highlights the role meeting WHL players had when he was younger.

“The post-game skates are a great opportunity to meet some of our younger fans,” Walker said. ” Growing up I used to go to Oil Kings and Oilers games with my dad and it was the little things like when the players gave you a quick chirp or hit the boards, that stuff sticks with you as a kid.”

The Pats are also active in their community, making visits to schools as well as volunteering at local stores.

“One of the things I really liked this year was going to a couple local of Tim Horton’s locations with my teammates and trading hockey cards with kids there,” Walker said. “Another good one is helping out at the local grocery stores; I know we do a lot of stuff for kids in the community but I think helping out there is great showing what we as a Club want to do for our city.”

‪It’s the last post-game skate of the year tonight at the Brandt Centre!‬ ‪Bring your skates and hit the ice with the Pats after the game against Saskatoon! ‬ ‪#JoinTheRegiment ‬

Community investment and interaction is one of the best ways the Blades give back to their fans. Every year, like many WHL Clubs, the Blades take on a number of community initiatives, from outdoor skating activities with kids, to reading in the classroom and inviting young supporters to the rink for a variety of hands-on activities.

One of the Blades’ most successful endeavours this season was the Family Day Skate. Blades players and staff were invited out for some outdoor skating and shinny at the Meewasin outdoor rink during Family Day in February, creating smiles and memories for those that support us all season long.

For three hours, the Blades, along with Pokecheck, enjoyed interacting with fans, signing autographs, taking photos, sipping hot chocolate, and playing the game that brings the community together. 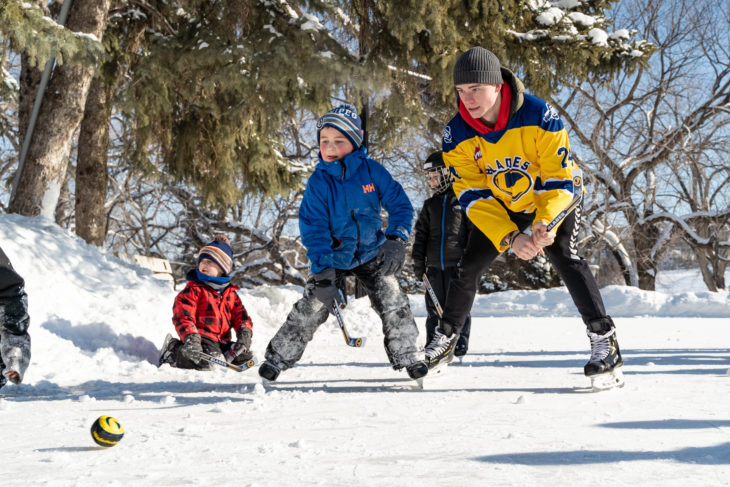 Another event that took place at the rink and brought out hundreds of young Blades fans, was the Kids Takeover on January 10. Following the Club’s 2-1 victory over Edmonton, the Blades invited elementary students onto the ice to design and colour the Club’s rink boards

The Blades fans proved to be much more than just greatest supporters, but also tremendous artists. Prior to the game, the Blades also invited a young girl to announce the starting lineup and voice in-game announcements. The game provided a great opportunity allowing kids to literally takeover the game which was a huge hit. 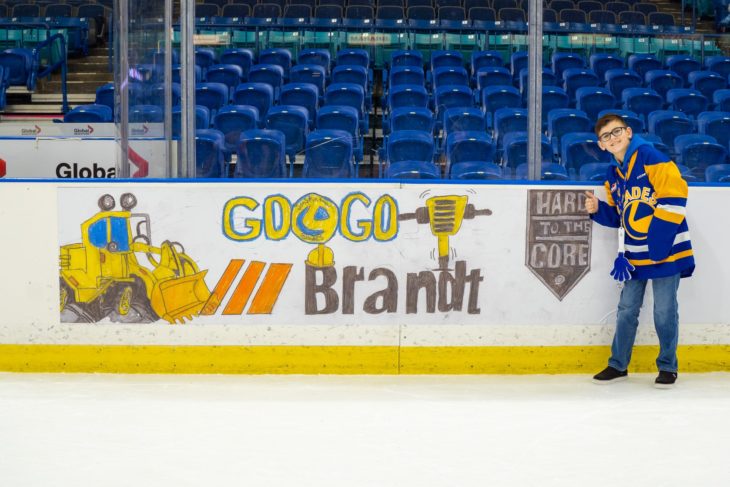 In the Club’s return to Winnipeg, the  ICE have kept active with their involvement in minor hockey. The ICE players went to over 25 practices this year as part of the Club’s Practice with the ICE program. Each time, two to three ICE players would get engaged in drills and ran some of practice. Some of the sessions included community fairs or hockey tournaments.

At these events, players such as Carson Lambos, Nolan Orzeck and Liam Hughes interacted with those who attend ance, making sessions welcoming to all skill levels.

The program concluded with the ICE skills clinic. The event hosted the full ICE roster and had the players run sessions for the youth at the ICE’s Training Facility free of charge.

Awesome time last night at Practice with the ICE presented by @playtruehockey with the South Winnipeg Kings Peewee White! To have an ICE player join your practice apply online here ➡️ https://bit.ly/2u09p37