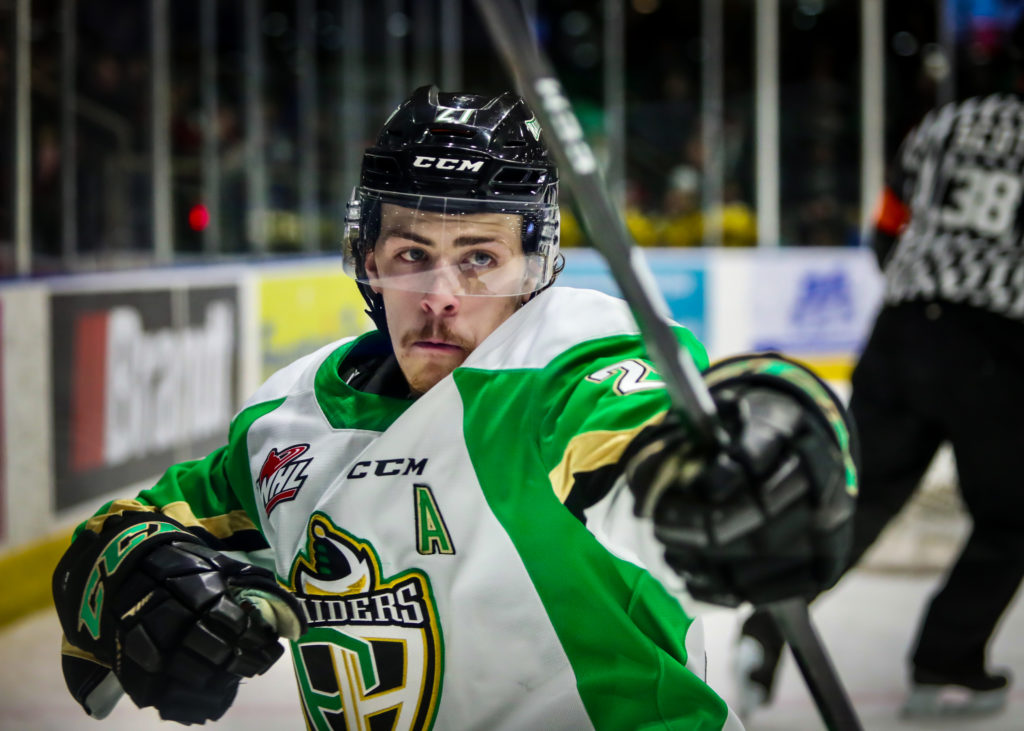 Watts had two goals in the win as he suited up in his 300th career WHL game. With the pair of goals, he surpassed the 20-goal mark for the first time in his career.

The two teams played to a scoreless first period. The best chance of the opening 20 minutes came from Justin Nachbaur. He was able to get around Alex Cotton for a partial breakaway. His shot beat Carl Tetachuk, but stayed out as it hit the post.

The Raiders got the scoring started 1:08 into the second period. Ozzy Wiesblatt cut through the neutral zone and danced into the offensive zone. He got around a defender then set up Usau with a backdoor tap in for Usau’s 17th of the season.

Two minutes later, the Hurricanes tied it up. Trevor Thurston picked up the puck off a faceoff and skated over the blue line. He put a shot on goal that handcuffed Max Paddock. The Raiders goaltender got a piece of the shot, but it bounced over his head and into the net to make it a 1-1 game.

Watts got his first of the game with 4:09 to restore the Raiders’ lead. Aliaksei Protas poked the puck away from Dylan Cozens as he tried to exit the zone. Nachbaur collected it and found Watts behind the Hurricanes’ defence. The Bakersfield, CA product chipped a backhander past Tetachuk for his 20th goal of the season, giving the Raiders a 2-1 lead after two periods.

Hayes extended the Raiders’ lead late in the third period after a stretch of more than seven minutes without a whistle. Protas had the puck on the left wing on the power play. He spotted Hayes on the other wing and hit the Raiders’ captain with a pass. Hayes one-timed the shot past a sprawling Tetachuk for his fourth goal of the season to make it a 3-1 game.

With the net empty late in the third, Watts stopped an Alex Cotton pass at the Hurricanes’ blueline and sent it past the defenceman and into the goal to round out the scoring at 4-1 with his 21st goal of the year.

Paddock stopped 18 of 19 shots to earn his fifth win as a Raider and 15th on the season. Tetachuk stopped 20 shots in the loss for the Hurricanes.

The Raiders head to Swift Current tomorrow night to take on the Broncos at the Innovation Credit Union i-Plex to start a four-game stretch on the road. Game time is 7 p.m. Catch the game at The Rock And Iron Sports Bar or listen on 900 CKBI with Trevor Redden.

The next Raiders’ home game is on Friday, February 14 when the Broncos make their final trip of the season to the Art Hauser Centre. Puck drop is 7 p.m. Tickets are available at the Raiders Office and online here.