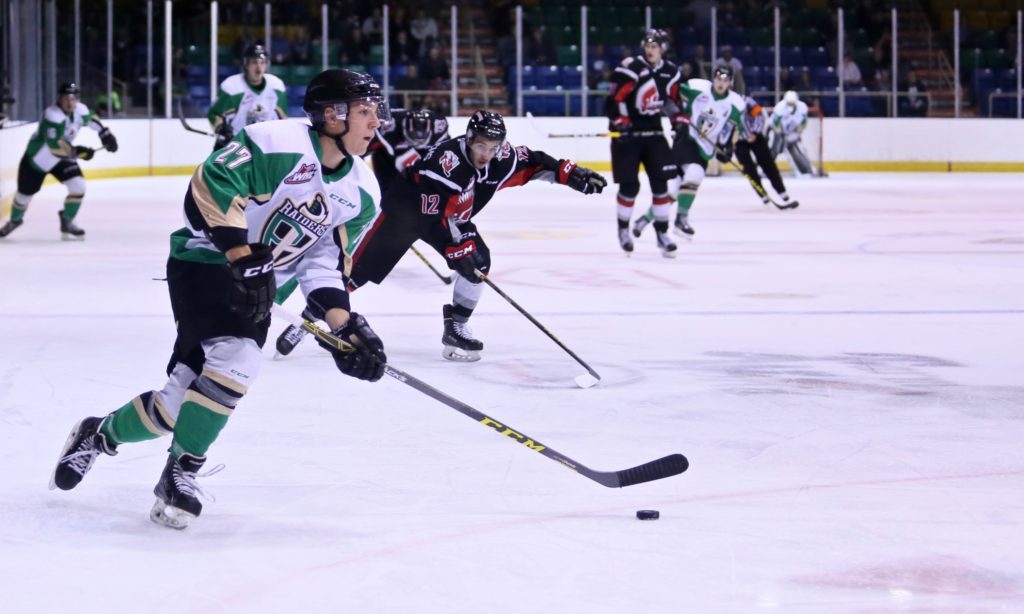 Prince Albert, SK – Prince Albert Raiders captain Tim Vanstone had a goal and four assists to lead his team to a 6-3 win over the Moose Jaw Warriors on Thursday night at the Art Hauser Centre.

It was the Raiders’ third consecutive win of the preseason.

Josh Maser opened the scoring in the first period for the Raiders (3-1-0-0), tipping a Lane Kirk point shot past Warriors goaltender Adam Evanoff at the 8:18 mark. Five minutes later, Sean Montgomery scored following a nice pass from behind the net by Vanstone.

Moose Jaw (3-3-0-0) quickly tied the game in the second with back-to-back goals from Luka Burzan and Jayden Halbgewachs. The Raiders responded when Parker Kelly’s wrist shot broke the water bottle over Evanoff’s shoulder. Then, Vanstone scored on the power play to make it a 4-2 game after two periods.

In the third, Kelly scored his second goal of the game to raise the Raiders’ lead to three. Tristin Langan scored for the Warriors to cut into the lead, but Carson Miller sealed the game with an empty-net tally.

Ian Scott made the start in net for the Raiders, making 18 saves in just over 32 minutes of play. Curtis Meger stopped 21 shots after taking over for the 17-year-old. Evanoff stopped 17 shots in the loss for the Warriors.

The Raiders are back in action on Friday night in Swift Current to take on the Broncos in their final preseason game.

The next home game for the Raiders is the 2016-17 Home Opener against the Regina Pats on Saturday, September 24. Puck drop is at 7 p.m.