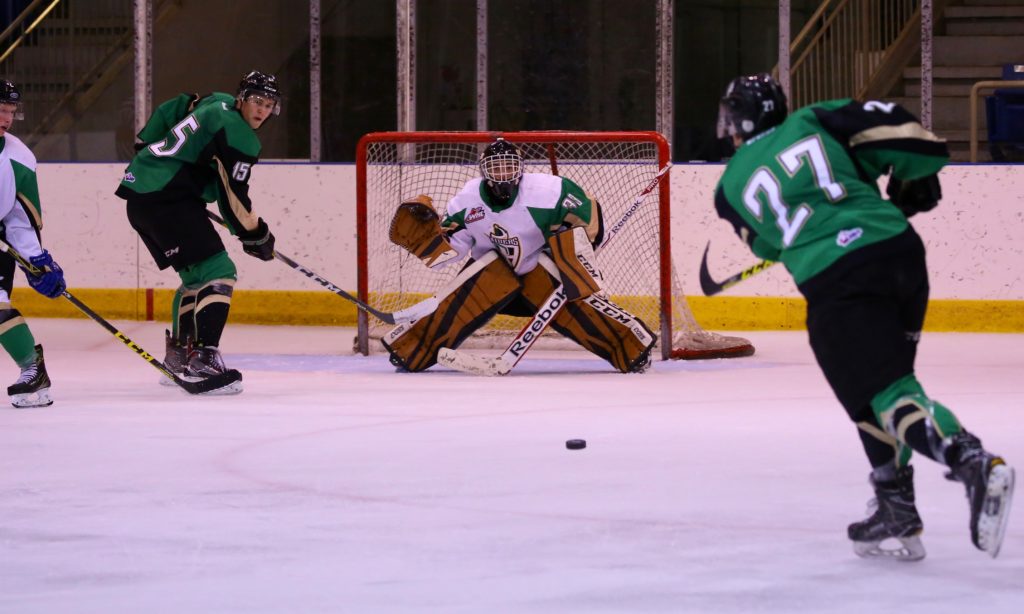 D-Jay Jerome, Parker Kelly, and Jordy Stallard combined for 11 points to lead Green to a 7-5 win over Team White. Kelly and Stallard led the way with four points each, while Jerome netted three points.

In the first, Jerome opened the scoring 1:10 into the contest. Stallard then netted his two goals three minutes apart to give Green a 3-0 lead.

Team White responded in the second. Brayden Pachal got his side on the board 2:27 into the frame. Nikita Krivokrasov cut the lead down to one when he beat Curtis Meger on a wraparound attempt a minute later.

The teams changed goalies midway through the second. Meger stopped 15 shots on 17 attempts to leave the game with the lead. Josh Breznik made 17 saves in his approximately 30 minutes of action.

Five minutes after the goalie change, Austin Crossley snapped a shot from the point through a screened Brett Balas to knot the game up at 3-3 after two.

Green took back the lead 6:37 into the third period on Kelly’s lone goal of the game. About a minute later, Kaiden Guhle beat Andreai Proctor-Ramirez from the point to put Green up two. Thirty seconds later, Ozzy Wiesblatt scored what ended up being the game-winning goal to make it a 6-3 game.

White battled back with two goals 27 seconds apart midway through the frame. First, Drew Warkentine solved Balas followed shortly after by Devon Skoleski on a breakaway.

Carson Miller sealed the game for Green when he deposited a Wiesblatt rebound with 2:41 to play to wrap up the scoring at 7-5.

Balas finished his half-game of work with 21 saves for Green. Proctor-Ramirez stopped 11 shots for White.

The Raiders open their pre-season schedule tomorrow afternoon when the Saskatoon Blades come to the Art Hauser Centre for the Young Guns Game. Puck drop is 1 p.m. Admission is $5 for children and $10 for adults.

The 2017-18 WHL Regular Season begins on Friday, September 22 when the Raiders host the Moose Jaw Warriors for the first half of a home-and-home series. Puck drop is 7 p.m. Single game tickets are available on Tuesday morning.