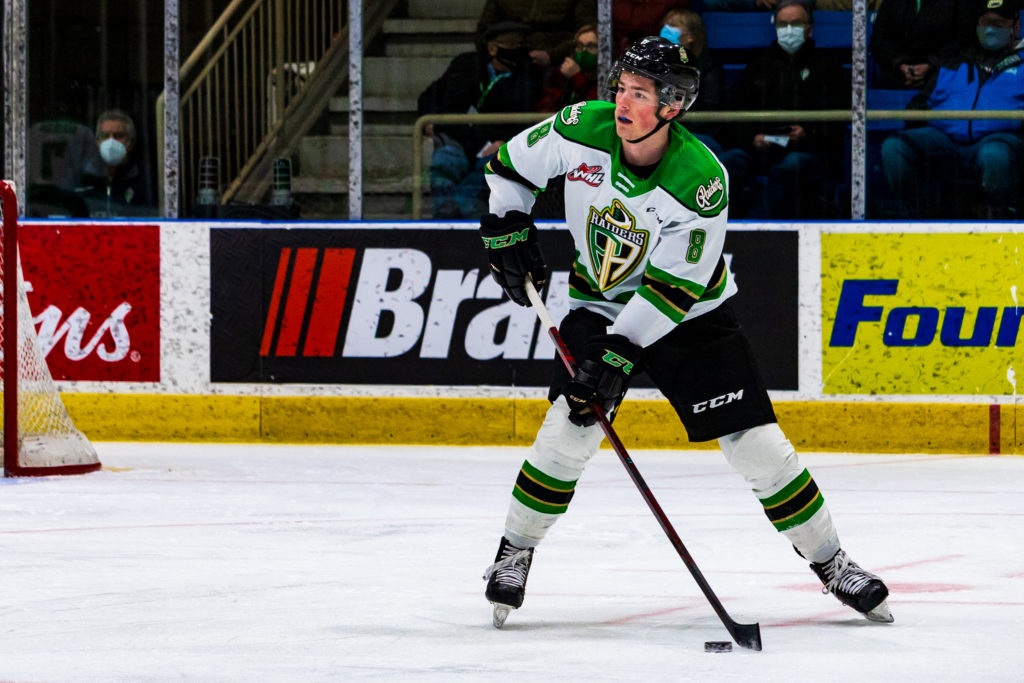 “It was pretty cool to get the call,” is how Trevor Thurston described his invite to Calgary for the Flames’ development camp this week. The 20-year-old Raider defenceman was among 43 players who got the call to Calgary, as camps across the NHL kicked off on Monday.

“It was pretty exciting, but I kept it to myself for a little bit, but then I told my friends and family that I was going and they were really excited for me. I was just excited that I got that call after working hard for all these years.”

The camp kicked off on Monday in Calgary, with players taking fitness tests before they hit the ice on Tuesday. After day one, Thurston said he is feeling good heading into Tuesday’s practice sessions, all while taking time to live in the moment at an NHL camp.

“We did a lot of fitness testing, which I haven’t done in a while. I’ve just been working out and getting myself bigger, and changing my workout plans halfway through the summer. It’s been good to see what the older guys have been doing and what the camp has to offer. It’s just a cool experience to be around this organization.”

Thurston, who was dealt from the Hurricanes to the Raiders on December 31st, 2021, says he learned a lot from his 27 regular season and playoff games with the green and gold. Getting to play alongside NHL first rounder Nolan Allan, as well as some of the older d-men on the team like Remy Aquilon and Landon Kosior gave him a refreshing view of the game. Thurston explained what part of his game he was able to grow the most towards the end of the season.

“I think being more patient was a big thing for me,” he said. “Just taking what’s given in front of you, and not going out to try and impress anyone, and do what’s best for you and for the team. Now at camp, I just want to go out and do everything I can, and push myself to the limit. I want to show my skills and my compete and everything that they like in me. I’m going to show them why I’m here, and that it wasn’t a mistake.”

Heading into what will be his final season in the WHL, Thurston sees this development camp as an opportunity to develop some leadership skills on the back end. He is entering his overage season in the league and knows that veteran leadership is a core value within any team, but knows he will be ready to handle it.

“There’s the opportunity to be more interactive with the guys and hanging around with the group. I’m usually the guy that’s on his own, but being around here in Calgary and getting to know new people, a new organization and new staff, I’m learning how to be more interactive with everyone. I think that can really help me going back to PA as an overage guy, and helping our younger guys get a feel for the city, and it’ll help me become a better player overall.”