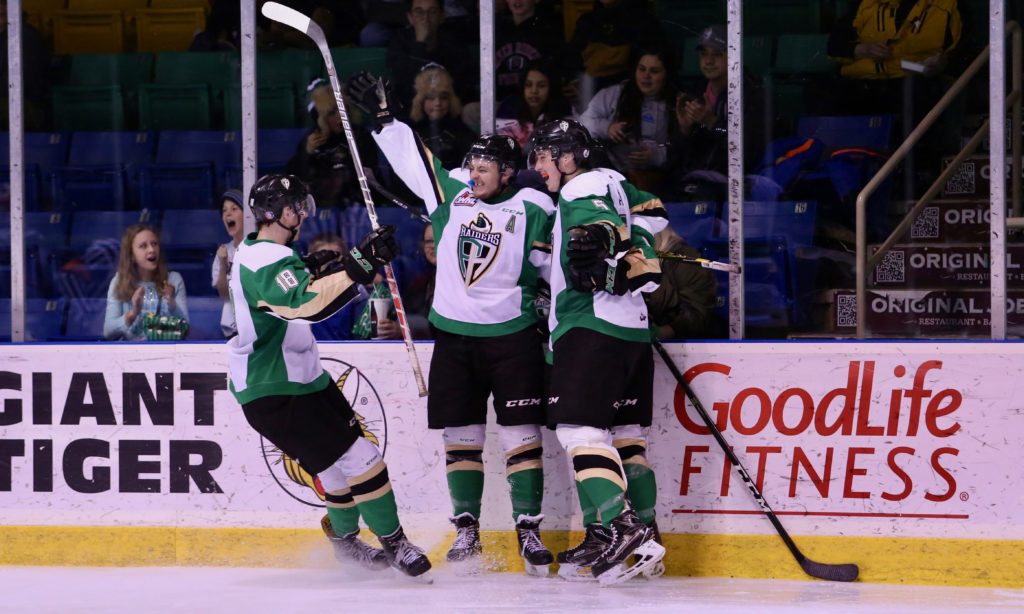 The Warriors took an early lead in the game when Justin Almeida found the back of the net 4:12 into the game. The Raiders responded with two goals within 41 seconds to take a 2-1 lead after the first period. First, Parker Kelly whacked a loose puck past Brody Willms. Then, Curtis Miske tallied an unassisted marker to give his team the lead.

In the second, the Raiders scored just 15 seconds into the period to make it a 3-1 game. Simon Stransky snapped a shot through a screen set by Parker Kelly, who may have got a piece of the puck. However, the goal was credited to Stransky.

The Warriors fought back with two goals of their own four minutes later. Brayden Burke and Aleida scored 44 seconds apart to send the game to the intermission as a 3-3 tie.

Thomas Foster gave the Warriors a 4-3 lead 1:18 into the third period. The goal was reviewed for a kicking motion, but it was deemed a good goal.

The Raiders’ special teams took over from there. Cavin Leth forced a shorthanded turnover and broke in on Zach Sawchenko, who replaced Willms in the second period. The Raiders’ 20-year-old beat Sawchenko with a shot that trickled over the goal line to tie the game. Then, with 6:25 to play, Cole Fonstad tallied the game-winning goal on the power play with assists from Leth and Carson Miller.

Nicholas Sanders made 27 saves to earn his fourth win of the season and fourth in five games. Sawchenko took the loss for the Warriors after making 12 saves in relief of Willms.

The Insurance Goal of the Game was scored by #24 @fonstad_24! Check out more #InsuranceGoals at https://t.co/6jMYE5Ggdn pic.twitter.com/0jGhgrnbrY

The Raiders are back in action on Sunday afternoon when they travel to Swift Current to take on the Broncos. Game time is 4 p.m. The next Raiders’ home game is on Friday night when they host the Red Deer Rebels at the Art Hauser Centre. Puck drop is 7 p.m. Tickets are available here, the Raider Office or by calling 306-764-5348.