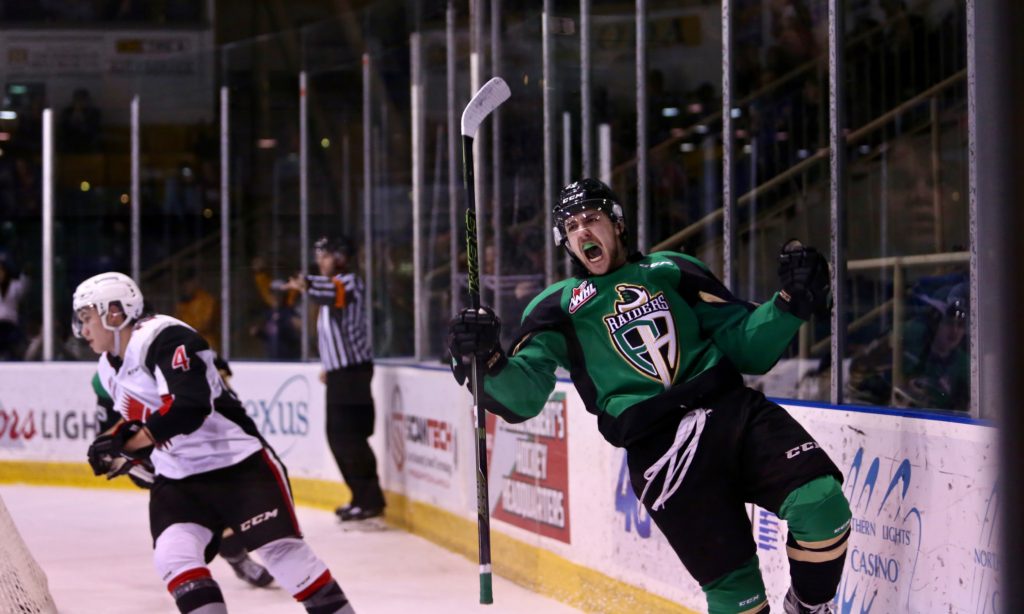 The win ended the Raiders’ nine-game losing streak this season and six-game skid at the hands of the Warriors.

Brandon Armstrong opened the scoring of the Warriors with 6:53 remaining in the first. Cavin Leth responded about two minutes for the Raiders, blasting a slap shot past Brody Willms to make it a 1-1 game after 20 minutes.

In the second, Simon Stransky gave the Raiders the lead near the end of the period. With 2:14 remaining, he snapped his shot past Willms for his first goal in seven games. It gave the Raiders a 2-1 lead heading into the third.

In that final frame, Austin Glover found the back of the net at the 6:47 mark off of an offensive zone faceoff following a Moose Jaw penalty. That snapped Glover’s eight-game goalless drought. That score held until the final two minutes of the game. Max Martin scored into the empty net from his own goal line for his first as a Raider to put his team up 4-1. Nikita Popugaev and Jayden Halbgewachs responded with two goals 13 seconds apart to make it a 4-3 game. However, Stransky sealed it with his second of the night – this time into the empty net – to make the final score 5-3.

Ian Scott earned his fifth win of the season by turning aside 31 Warrior shots. Willms took the loss for the Warriors, making 36 saves.

The Raiders are back in action on Saturday night when they travel to Regina to tangle with the Pats. Game time is 7 p.m. The Raiders’ next home game is Tuesday when they welcome the Calgary Hitmen into the Art Hauser Centre. Puck drop is 7 p.m. Tickets are available here, the Raider Office or by calling 306-764-5348.