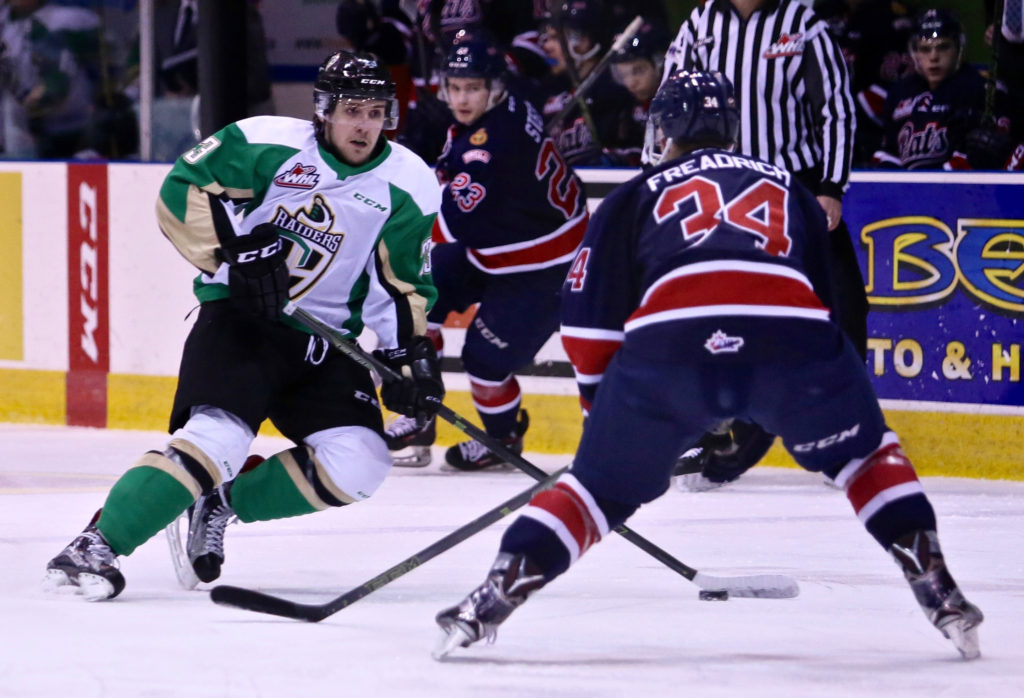 Regina, SK – Simon Stransky scored at the 2:57 mark of overtime to lift the Prince Albert Raiders to a 4-3 win over the Pats in Regina on Friday night in both team’s first game of the 2016-17 WHL Regular Season.

Stransky finished the game with three points and earned first star honours in his first appearance with the team since returning from training camp with the Boston Bruins.

Regina (0-0-1-0) opened the scoring early in the first period. Riley Woods decided to shoot on a two-on-one rush, snapping it past Raiders goaltender Ian Scott. The 17-year-old netminder was stellar for the Raiders in the opening period, stopping 15 of the 16 shots fired his way.

In the second, the Raiders (1-0-0-0) found the equalizer on the power play. Austin Glover finished off a pretty passing play with Kolten Olynek and Stransky to get Prince Albert’s first goal of the 2016-17 season. The Pats regained the lead on a power play of their own with 7:14 remaining in the second stanza as Chase Harrison beat a screened Scott.

The Raiders scored two goals within 1:15 in the third period to take a 3-2 lead. First, Simon Stransky tied the game when he pounced on a puck in the slot following an offensive zone faceoff. Then, Kolten Olynek finished off a great play by Zack Andrusiak to put the Raiders ahead. Late in the third, Braydon Buziak tied the game to send it to overtime.

In a back-and-forth extra period, Stransky kept on a two-on-one with Glover, snapping it past Pats goaltender Tyler Brown.

Scott kept up his strong play throughout the game, making 42 saves to pick up the win. Brown stopped 26 shots for the Pats in the loss.

The Raiders are back at it on Saturday night when they host the Pats in their 2016-17 Home Opener at the Art Hauser Centre. Puck drop is at 7 p.m.