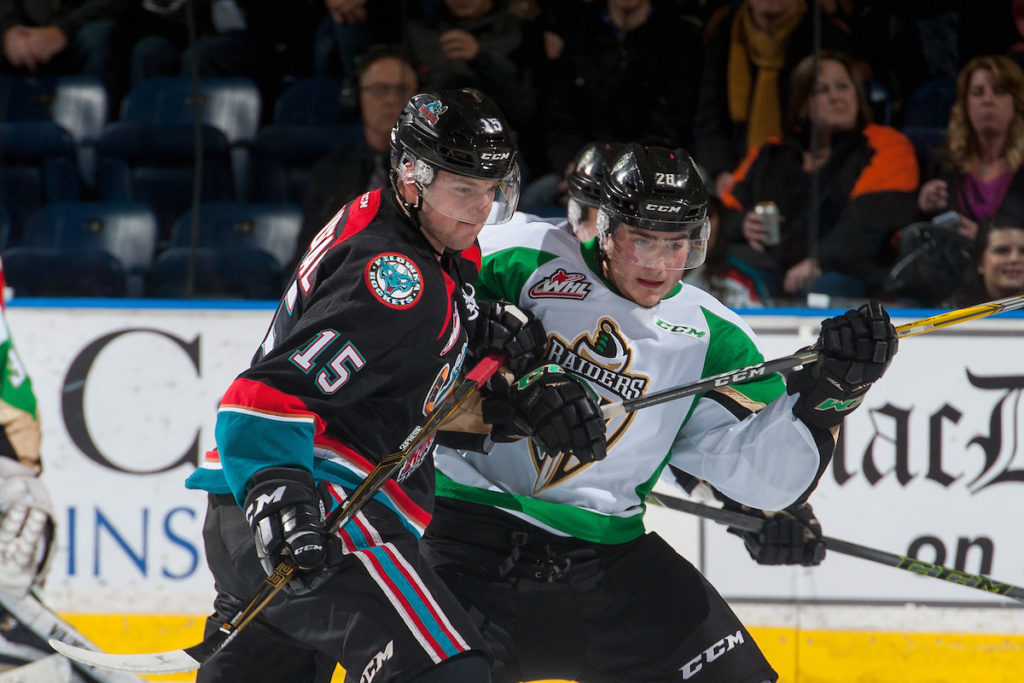 Kelowna, B.C. – The Prince Albert Raiders (5-13-1-0) had no answer for the Kelowna Rockets’ power play on Saturday night as the home side skated to a 7-1 win at Prospera Place.

Kelowna (11-9-0-0) scored their first four goals of the game on the power play to put the contest out of reach. Those goals were the first the Raiders had surrendered with the man-advantage in the last four games.

The Rockets got on the board early in their first power-play opportunity of the night when Calvin Thurkauf scored his eighth goal of the season. Later in the frame, Jake Kryski got a puck past Ian Scott on another power-play chance for Kelowna to make it 2-0 after the first period. Despite giving up two goals, Scott was the star of the first period for the Raiders. He finished the opening period with 17 saves.

Kelowna’s special teams kept the offence going in the second. Tomas Soustal converted to give the Rockets a 3-0 lead. On the next Raiders’ penalty kill, Nick Merkley picked the corner over Scott’s glove to put the Rockets up four heading into the third period.

Less than two minutes into the third, the Rockets scored their first even strength goal of the game. Kole Lind’s wrist shot eluded Scott’s glove to give Kelowna a 5-0 lead. Simon Stransky spoiled Michael Herringer’s shutout bid at the 9:05 mark of the third. He streaked down the wing and snapped it past Herringer for his eighth goal of the season. Shortly after, Cal Foote responded for the Rockets to make it a 6-1 game. Kryski then gave Kelowna a 7-1 lead, spelling the end of the night for Scott. He finished the game with 27 saves.

Nicholas Sanders finished the game in goal for the Raiders, stopping four shots in the final 7:50 of the game. Herringer made 23 saves to earn the win in net for the Rockets.

The Raiders have a couple of days off on their B.C. road trip before taking on the Victoria Royals at the Save-On-Foods Memorial Arena on Tuesday night. Game time is 9:05 p.m. CST. The next Raiders’ home game is on Wednesday, November 23 against the Swift Current Broncos. Puck drop at the Art Hauser Centre is 7 p.m.