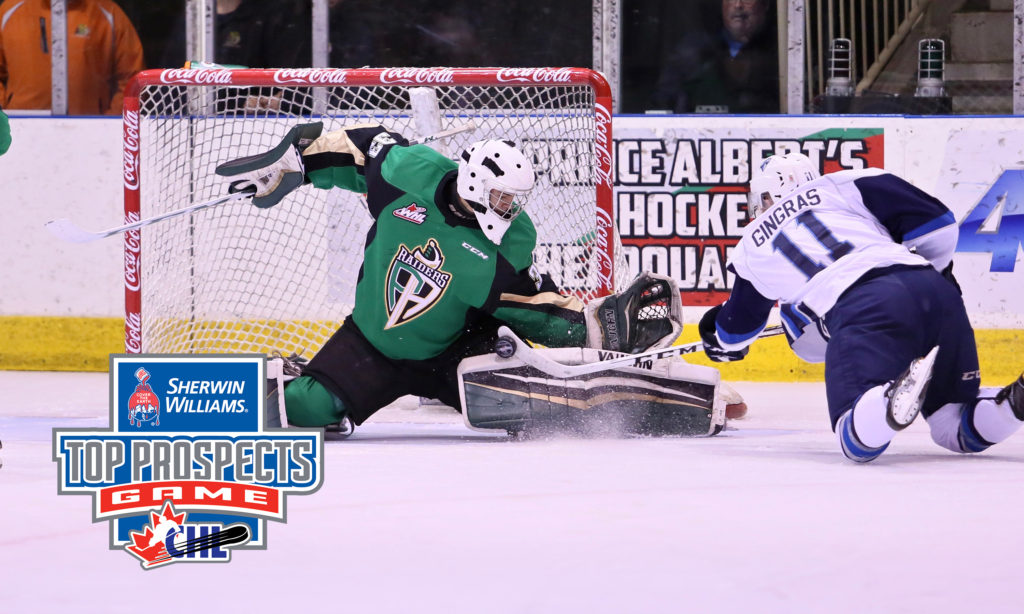 The 17-year-old netminder – who will turn 18 a couple weeks before the game – was named to Team Cherry for the game that takes place on Monday, January 30, 2017 at the Centre Vidéotron in Quebec City, QC. The rosters were announced by the Canadian Hockey League in association with the host Quebec Remparts Hockey Club and title partner Sherwin-Williams today.

“It’s definitely pretty exciting,” said Scott. “I’ve watched it in previous years and it’s just a good opportunity to show my game to all those watching.”

The Raiders have been well represented in the event in recent years, sending at least one player each year since 2011. Scott has played with two of the most recent Raiders to get named to the team – Simon Stransky and former Raider Brendan Guhle.

“I always pick the brains of people who went to the combine and stuff like that and the Top Prospects Game,” Scott said. “It’s a fun experience, [Simon] says, and it’s just something to look forward to.”

Scott is one of 40 CHL players competing in the game. The rosters were chosen by all 30 NHL clubs and divided into teams by NHL Central Scouting. This year marks the 22nd annual showcase of the CHL’s top-40 NHL Draft eligible players featuring talent for them QMJHL, OHL and WHL.

“The Sherwin-Williams CHL/NHL Top Prospects Game is one of the highlights of the hockey season and a truly special experience for players from across the CHL,” said CHL President David Branch. “Since 1996 this event has annually featured the next wave of NHL talent showcasing their skills before hundreds of NHL scouts and General Managers.  We look forward to January 30 with 40 of the top CHL players eligible for the 2017 NHL Draft competing before the passionate hockey fans in Quebec City and to CHL fans across Canada watching live on Sportsnet and TVA Sports.”

The rosters include all 17 CHL players who received ‘A’ ratings by NHL Central Scouting in their November Players to Watch list including Scott, Nolan Patrick of the Brandon Wheat Kings, Maxime Comtois of the Victoriaville Tigres, and Gabriel Vilardi of the Windsor Spitfires who will compete for Team Cherry.  Team Orr includes ‘A’ rated players such as Nico Hischier of the Halifax Mooseheads, Matthew Strome of the Hamilton Bulldogs, and Kailer Yamamoto of the Spokane Chiefs.

“As the Official Paint of the CHL, Sherwin-Williams is proud to sponsor the 2017 Sherwin-Williams CHL/NHL Top Prospects Game,” said Paul Clifford, President and General Manager, Sherwin-Williams. “We take great pride in making a difference in the communities we serve and we look forward to celebrating this great sport alongside these talented hockey players and their fans across Canada.”

“The Sherwin-Williams CHL/NHL Top Prospects Game provides a unique opportunity for NHL scouts and General Managers to evaluate top CHL talent for the 2017 NHL Draft in a best-on-best competition,” said NHL Central Scouting Director Dan Marr. “It’s also a unique opportunity for the players to take advantage of the spotlight in what is consistently an exciting and highly competitive showcase.”

Team Cherry and Team Orr coaching staffs in addition to captains and alternates will be announced at a later date.

The 2017 Sherwin-Williams CHL/NHL Top Prospects Game is proudly supported by title partner Sherwin-Williams, and CHL associate sponsors CIBC, Cooper Tire, and autoTRADER.ca.  The game will be broadcast live on Sportsnet and TVA Sports.

Tickets are still available through the box office at 1-855-790-1245 or visit Ticketmaster to purchase online.