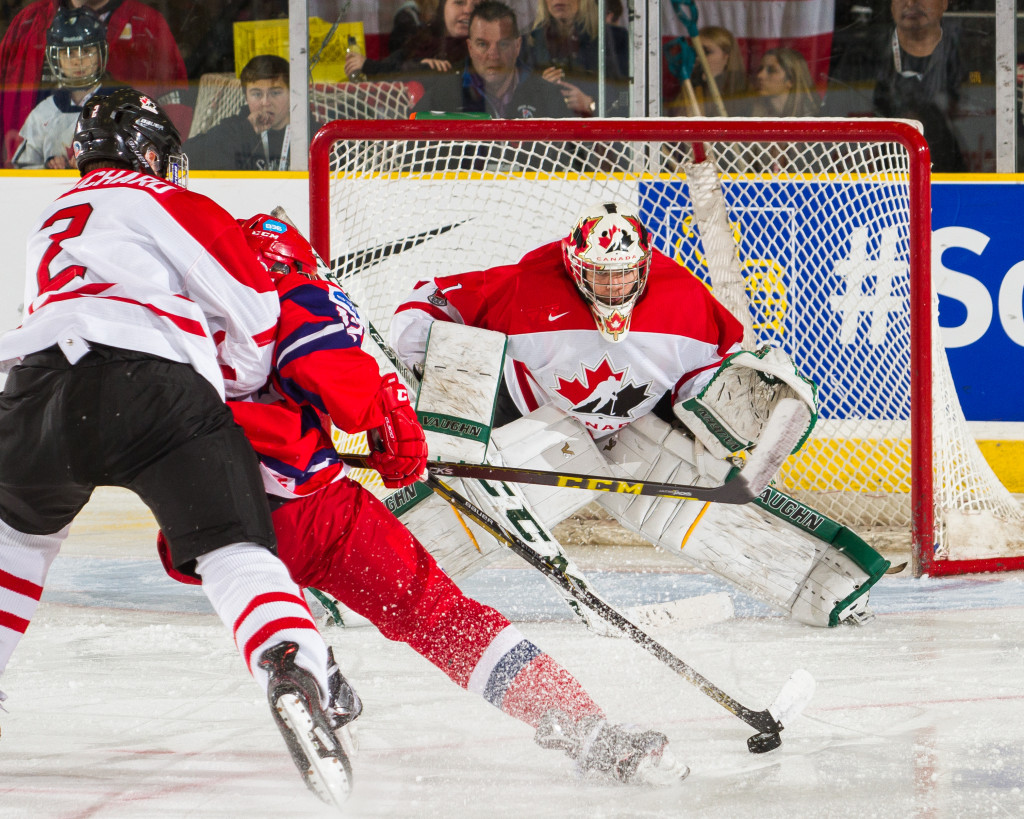 Ian Scott stares down a Russian player during the gold medal game at the 2015 World Under-17 Hockey Challenge at the Encana Event Centre in Dawson Creek, BC. (Photo: Dennis Pajot/Hockey Canada Images)

Prince Albert, SK – The Prince Albert Raiders would like to congratulate goaltender Ian Scott on being named to Canada’s 22-man roster for the 2016 Ivan Hlinka Memorial Cup.

The eight-team tournament runs from Aug. 8 to 13 in Breclav, Czech Republic and Bratislava, Slovakia. The tourney features the best Under-18 players in the world.

“It’s an amazing feeling,” said Scott. “I can’t really describe it yet.”

The Calgary product was named to the team following a five-day camp that featured on- and off-ice sessions and three instrasquad games with 44 players vying to wear the Maple Leaf on their sweater this summer.

“The Ivan Hlinka Memorial Cup is a unique event for us because it’s one of the few opportunities we have to assemble the very best players in the country; the August timing doesn’t conflict with other league priorities, so it really sets up to be a best-on-best event and a great display of on-ice skill and talent,” said Ryan Jankowski, Hockey Canada’s director of player personnel, in a Hockey Canada press release. “Canadians can expect good speed, size, and talent from this year’s National Men’s Summer Under-18 Team. It is a well-balanced group of players. The players and our team staff are excited and ready to represent Canada with pride once again.”

Canada will play in Group B, which consists of Russia, Slovakia and Sweden. Group A features the Czech Republic, Finland, Switzerland and the United States.

Scott and Canada will play the Czech Republic in a pre-tournament game on Aug. 6 before playing their tournament opener on Aug. 8 against Slovakia. Canada is searching for their ninth-straight gold medal at the event.

This is the second-straight year Scott has represented Canada on the international stage. Last fall, he backstopped Canada White to a gold medal at the 2015 World Under-17 Hockey Challenge.