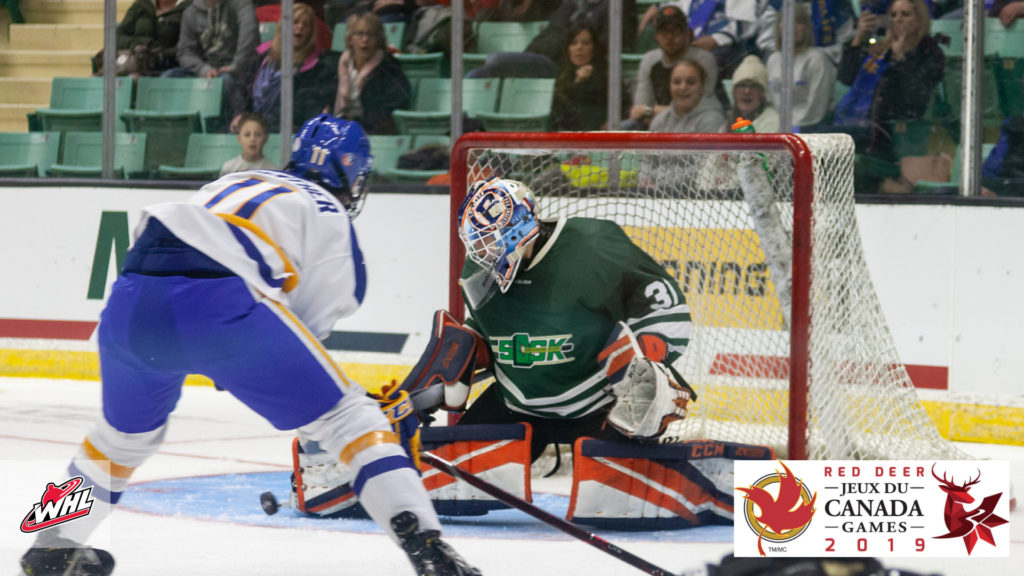 The male hockey competition at the 2019 Canada Winter Games began Saturday in Red Deer, Alta., with Saskatchewan and Manitoba striking back at two traditional powerhouses in the sport.

Brett Mirwald (Saskatoon, Sask./Moose Jaw Warriors) stopped 40 of 42 shots in the victory as his province moved to 1-0 at the tournament. Alberta was quick to open the scoring from the stick of Kai Uchacz (De Winton, Alta./Seattle Thunderbirds), but Karter Posofsky (Saskatoon, Sask./Kootenay ICE) would respond shortly to tie it up. Alberta would take their second lead of the game midway through the opening period on a goal by Dylan Guenther (Edmonton, Alta./Edmonton Oil Kings) to have the lead after 20 minutes.

Saskatchewan tied the game up again in the second as Ashton Ferster (Prince Albert, Sask./Medicine Hat Tigers) potted his first of the tournament, but Zack Stringer (Lethbridge, Alta./Lethbridge Hurricanes) gave Alberta the lead back late in the period. In the third, Saskatchewan would rally for the third time to tie the game as Logan Linklater (Kindersley, Sask./Prince Albert Raiders) struck for his side midway through the period.

That’d send the two teams off to extra time, where Allan gave his province their first lead of the game, ending the contest in their favour.

Dawson Pasternak (Winnipeg, Man/Portland Winterhawks) picked up a goal and an assist and Tyler Brennan (Winnipeg, Man/Prince George Cougars) stopped 37 of 39 shots in a 4-2 win for Manitoba against British Columbia.

Graham Sward (Abbotsford, B.C./Spokane Chiefs) had the lone goal through 20 minutes. Manitoba responded from the stick of Skyler Bruce (Winnipeg, Man./Kootenay ICE) to get them on the board, but Caedan Bankier (Surrey, B.C./Kamloops Blazers) put his province back into the lead just 100 seconds later.

Manitoba would tie the game before the end of the period though as Pasternak struck in the final minute of play.

The only two goals of the third period belonged to Manitoba as Hunter Wallace (Oak Lake, Man./Brandon Wheat Kings) and Justin Lies (Flin Flon, Man./Vancouver Giants) both found the back of the net.

Samuel Schofield (Yellowknife, Nwt./Swift Current Broncos) had a goal and an assist Saturday as his team took an opening-game loss to Newfoundland by a 5-3 score.