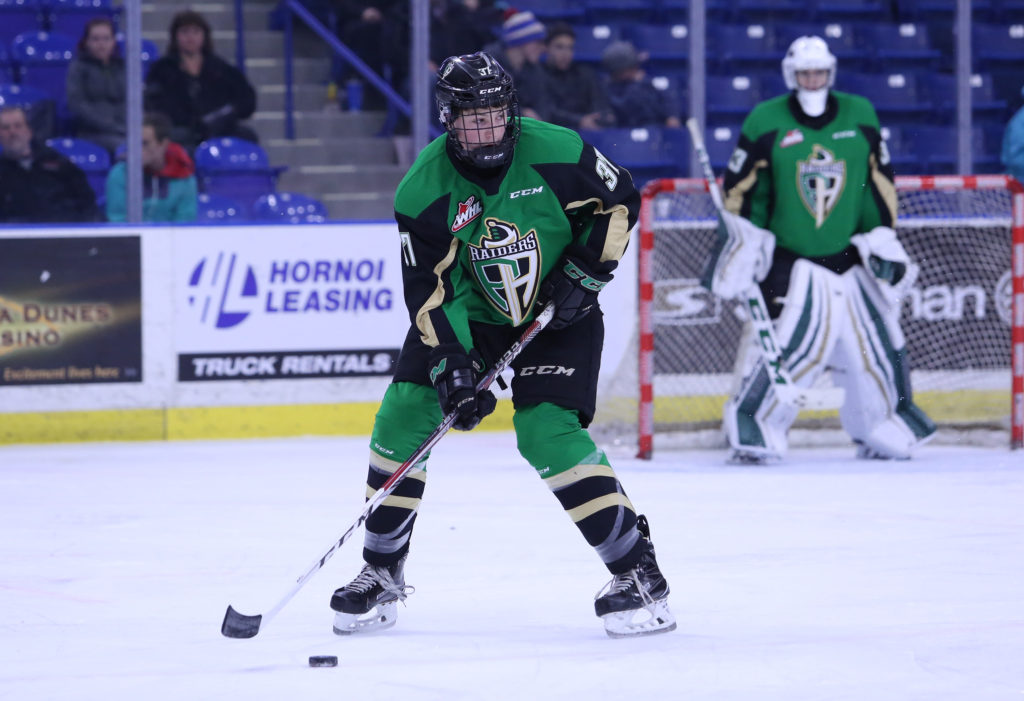 A year ago, the day Rhett Rhinehart dreamt of as a kid arrived.

Rhinehart, then 14, was fresh off of his appearance at the 2016 Alberta Cup and staring at his computer on the morning of the 2016 WHL Bantam Draft. As he watched the names pop up on his screen, he said he was getting antsy.

Then, the Raiders picked the 6’2”, 182-lb defenceman with the 13th overall pick of the draft. When he saw his name, he said it was a dream coming true, but it was hard concentrating on school the rest of the day.

“Since I’ve been a young kid, I’ve always dreamt of playing in the Western Hockey League and getting drafted,” Rhinehart said. “And not only being drafted, but being drafted pretty high. It was awesome and to have it all come true, it was great.”

Rhinehart was a standout on the blue line for the Yale Hockey Academy Bantam Prep in the CSSBHL, scoring five goals and adding 13 assists in 25 games played. He also had eight points in four playoff games during his draft year.

The draft set the stage for Rhinehart’s 2016-17 season. He got his first taste of being a Raider at the 2016 rookie camp, which let him meet and play with potential future teammates from the past two drafts.

He played his Midget AAA season with Yale Hockey Academy in the CSSHL, scoring nine goals and dishing out 21 assists in 25 games. He also played in two games for the Raiders in late December.

Rhinehart also represented his province in the 2016 U16 Western Canada Challenge Cup, helping Team Alberta to a perfect 3-0 round robin record and an eventual overtime win over BC in the gold medal game.

“It was a great experience,” said Rhinehart of the tournament. “It was a chance to play against all of the top kids in my age group from BC, Saskatchewan, (and) Manitoba. It was overall a great group of kids and it was awesome to come out as champion.”

Rhinehart said he used most of the year preparing his game to be able to make an easier transition to the WHL, with the focus on one notable trait.

“I’d say my most improved part was in my skating, like my footwork, in corners and getting up the ice and getting back,” he explained. “Just being able to move a lot quicker and more fluent with my stride.”

While looking ahead to next season, Rhinehart said his first goal was to make the squad. While speaking about the future, he did offer some advice to the newest members of the Raiders come draft day – be yourself.

“Don’t try and be anyone you’re not,” he offered. “Do what you do best and go do it out there.”

The 2017 WHL Bantam Draft is on Thursday in Calgary, AB. The Raiders have 15 picks in this year’s draft, including the first and 17th overall selections.

Season ticket packages for the 2017-18 campaign are now available. Early bird pricing is in effect until Monday, June 15. Stop the Raider Office for more information.