Rhinehart ‘Honoured’ To Win Silver At World Under 17s 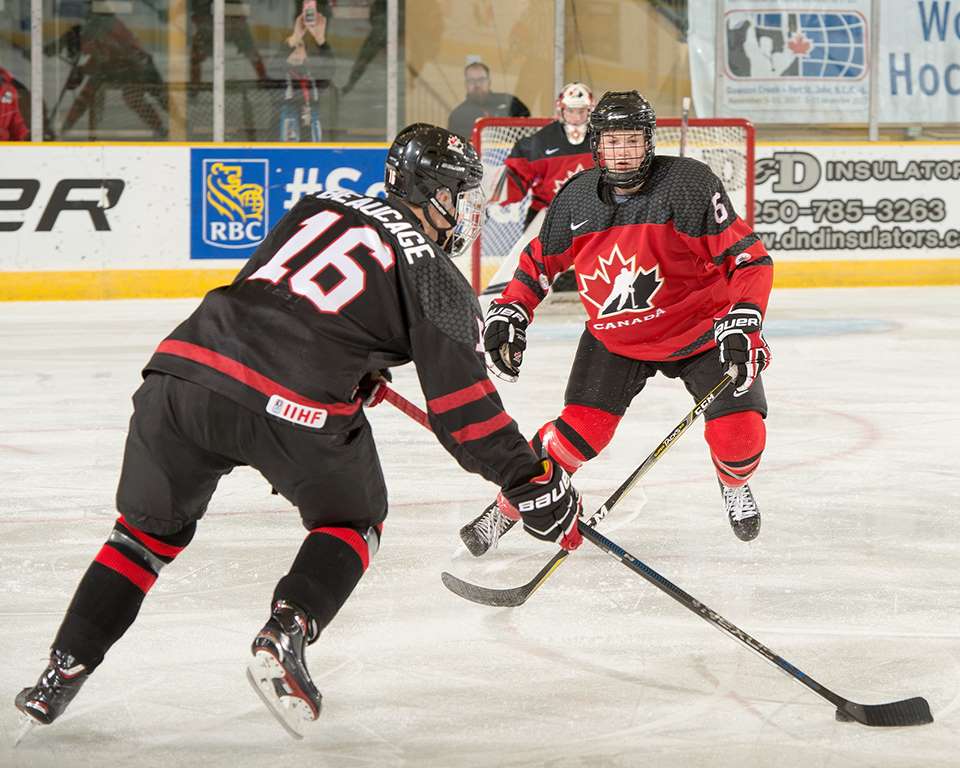 As the Prince Albert Raiders in the midst of their season-long six-game road trip, rookie defenceman Rhett Rhinehart has been away from home even longer.

The 15-year-old from Lloydminster, AB left for the 2017 World Under-17 Hockey Challenge in Dawson Creek and Fort St. John, BC on October 30. Rhinehart suited up for Canada Red at the event, playing six games in seven days.

He joined the team prior to the game in Portand, with only his sticks as his luggage was misplaced during his own odyssey. After the gold-medal game, Rhinehart bussed to Grande Prairie, AB before taking a flight to Calgary at 6 a.m. Following a two-hour layover, he flew from Calgary to Vancouver. After another layover, Rhinehart was picked up at the Portland International Airport.

“I’m pretty sore right now, legs are pretty tired,” Rhinehart said after joining the team at the Moda Center. “But I’m looking forward to getting back in the lineup here in Prince Albert.”

Rhinehart and his Canada Red side advanced to the gold-medal game of the World Under-17’s on Saturday night, falling 6-4 to the United States. The Raiders’ rookie was very complimentary of his opponents.

“They’re fast, skilled,” Rhinehart noted. “Their structure is unbelievable. They compete for the puck. Everything they do was top notch. Kudos to them. They were a great team and they deserved it.”

Rhinehart finished the tournament with one assist in his six games to go along with two penalty minutes. And even though he didn’t get the colour of medal he wanted, his team was the only Canadian team to win a medal at the eight-team tournament.

“That’s 22 kids from Canada this year that bring home a medal and I’m honoured to be one of those guys,” he said. “It’s a tough tournament and we were fortunate enough to come away with a medal.”

Canada Red finished the tournament with a 3-3 record. After finishing third in Group B with a 1-2 record, Rhinehart and his teammates picked up a 4-3 quarter-final win over Canada Black and a 3-2 semifinal victory against Czech Republic.

Rhinehart said it was an “overall great experience” to play with and compete against the top kids from his age. He also noted the speed and structure of play at the tournament will prepare him to rejoin the Raiders’ lineup.

“I’d say it’s really fast, lots of structure which is similar to (the WHL),” Rhinehart said. “Not quite the size that I’m used to here, but the speed, the skill, the structure are all things that are comparable and I think that will help me going down the way.”