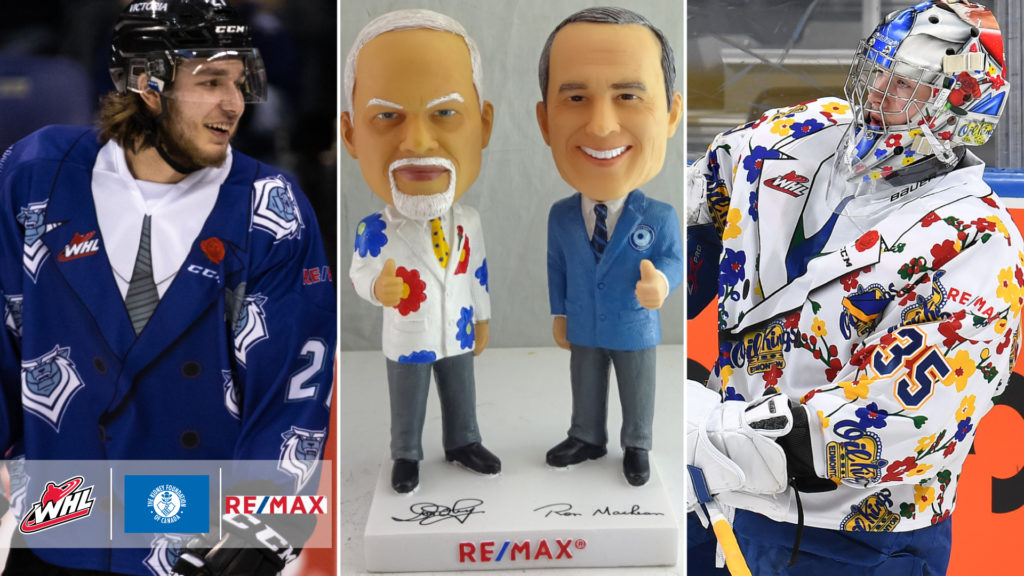 Kelowna, B.C. & Calgary, Alta. – RE/MAX of Western Canada, in partnership with the Western Hockey League, is excited to celebrate the history of Hockey Night in Canada during the third season of “RE/MAX Presents: WHL Suits Up with Don Cherry to Promote Organ Donation” in support of the Kidney Foundation of Canada.

Through the first two seasons of the partnership, over $460,000 has been raised for research of kidney disease in Canada.

Hockey Night in Canada has represented a Saturday institution in Canadian households, due in part to the larger-than-life character of Don Cherry, the star co-host of Coach’s Corner on CBC. The third season of WHL Suits Up will celebrate Don’s longstanding history with Hockey Night in Canada in a brand-new way that will spark nostalgia in hockey fans far and wide.

“The Western Hockey League is very proud to continue working alongside our partner RE/MAX of Western Canada to help generate further support for the Kidney Foundation of Canada,” commented WHL Commissioner Ron Robison. “Don Cherry has played an instrumental role in providing a voice and personality for the campaign, and it is with great excitement we now have the opportunity to incorporate the Hockey Night in Canada brand, and Don’s co-host Ron MacLean, as we strive to build this campaign to even greater heights during its third season.”

“At RE/MAX, we know how important it is to give back,” says Elton Ash, Regional Executive Vice President, RE/MAX of Western Canada. “Our agents are among the most generous in the industry and our involvement with the WHL, Don Cherry, and The Kidney Foundation of Canada is just one more initiative that we are pleased to be associated with. We’re excited about promoting this to the public in our third year of partnership and can’t wait to see the results from this year’s efforts.”

“We know Canadians stand behind organ donation,” Cherry said. “We saw this with the Humboldt Broncos’ Logan Boulet Effect. One organ donor can save up to eight lives. I am proud that we are continuing to raise awareness about organ donation for our third year with the WHL, RE/MAX, and the Kidney Foundation of Canada.”

Fans will have a chance to get their hands on the limited-edition Hockey Night in Canada-themed WHL sweaters through local auction with their WHL Club. The Kidney Foundation of Canada will once again be the benefactor, with 100 per cent of the proceeds raised going towards local chapters of the foundation. In addition to game-worn uniforms, fans will have the chance to bid on a Don Cherry-autographed theme jersey in each participating WHL market.

The Kidney Foundation will forever remain a cause close to the Cherry family, as Don’s son, Tim, received a kidney transplant from his sister Cindy. With close to 4,500 Canadians awaiting organ donation today – 76 per cent whom require a kidney – the Cherry family, RE/MAX and the WHL look forward to building upon the legacy of “RE/MAX Presents: WHL Suits Up with Don Cherry to Promote Organ Donation” in the third season of the program.

In an effort to continue building upon awareness surrounding the importance of organ donation, the Kidney Foundation of Canada will once again be present at each theme game to field questions and provide those interested with information on how to donate.

Related Links
Get Tickets for Jan. 25

About RE/MAX of Western Canada
RE/MAX was founded in 1973 by Dave and Gail Liniger, with an innovative, entrepreneurial culture affording its agents and franchisees the flexibility to operate their businesses with great independence. Over 125,000 agents provide RE/MAX a global reach of more than 110 countries and territories. RE/MAX is Canada’s leading real estate organization with more than 21,000 Sales Associates and over 922 independently-owned and operated offices nationwide. RE/MAX, LLC, one of the world’s leading franchisors of real estate brokerage services, is a subsidiary of RE/MAX Holdings, Inc. (NYSE:RMAX). With a passion for the communities in which its agents live and work, RE/MAX is proud to have raised more than $150 million for Children’s Miracle Network Hospitals® and other charities. For more information about RE/MAX, to search home listings or find an agent in your community, please visit www.remax.ca.