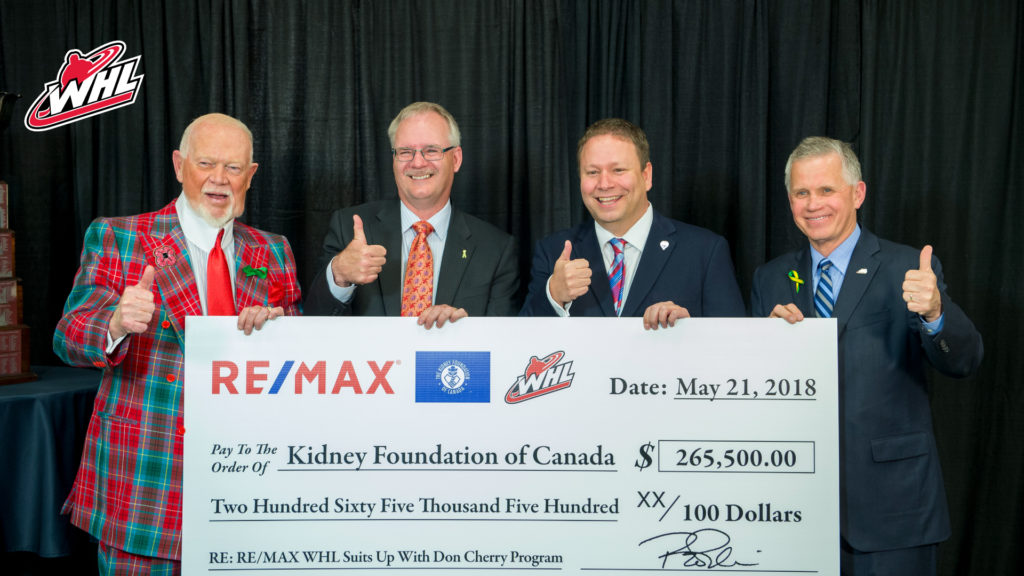 Regina, Sk – The Western Hockey League, in partnership with RE/MAX, is proud to announce that over $265,500 has been raised through the “RE/MAX Presents: WHL Suits Up with Don Cherry to Promote Organ Donation” campaign, hosted during the months of October and March during the 2017-18 WHL Regular Season.

WHL fans embraced the new program through the purchase of special Don Cherry suit-themed jerseys and by registering to be organ donors at CanadaDonates.ca. The $265,500 raised is the Kidney Foundation of Canada’s largest public awareness and fundraising campaign for organ donation.

Don Cherry, WHL Commissioner Ron Robison and Jeremy Cossette of RE/MAX of Western Canada presented a cheque for $265,500 to Kurtis Krug of the Kidney Foundation of Canada prior to Monday’s contest between the WHL’s Swift Current Broncos and OHL’s Hamilton Bulldogs at the 100th Mastercard Memorial Cup in Regina.

During the months of October 2017 and March 2018, 17 WHL Clubs played host to themed game nights, complete with a variety of promotions for fans in attendance. Special-edition Don Cherry bobbleheads were given to fans, along with limited-edition Don Cherry trading cards.

“I knew the people of the Western Hockey League would come through, and they came through in spades,” said Don Cherry, on behalf of the Kidney Foundation. “We couldn’t have done it without RE/MAX, our sponsor. $265,500 is the most we’ve ever raised and when you see something like that, it makes you very proud to be a Canadian.”

On the ice, WHL member Clubs sported unique Don Cherry-themed uniforms, which were then put up for auction, with proceeds designated towards local chapters of the Kidney Foundation of Canada.

“Being involved with the Cherry family and the Kidney Foundation was a very exciting opportunity for us,” said Elton Ash, Regional Executive Vice President for RE/MAX of Western Canada. “As long-time supporters of organ donation across Canada we hope this partnership has increased the awareness about how critical it is to be an organ donor. Many lives can be enriched and saved when you register as a donor.”

The Kidney Foundation is a cause close to the Cherry family. Don’s son, Tim, received a kidney transplant from his sister Cindy. With close to 4,500 Canadians awaiting organ donation today – 76 per cent whom require a kidney – the Cherry family, RE/MAX and the WHL have come together to create this awareness campaign in support of the Kidney Foundation.

For more information on “RE/MAX Presents: WHL Suits Up with Don Cherry to Promote Organ Donation” or to sign up to be a donor, visit CanadaDonates.ca.

About RE/MAX of Western Canada
RE/MAX was founded in 1973 by Dave and Gail Liniger, with an innovative, entrepreneurial culture affording its agents and franchisees the flexibility to operate their businesses with great independence. Over 115,000 agents provide RE/MAX a global reach of more than 100 countries and territories. RE/MAX is Canada’s leading real estate organization with more than 21,000 Sales Associates and over 922 independently-owned and operated offices nationwide. RE/MAX, LLC, one of the world’s leading franchisors of real estate brokerage services, is a subsidiary of RE/MAX Holdings, Inc. (NYSE:RMAX). With a passion for the communities in which its agents live and work, RE/MAX is proud to have raised more than $150 million for Children’s Miracle Network Hospitals® and other charities. For more information about RE/MAX, to search home listings or find an agent in your community, please visit www.remax.ca.