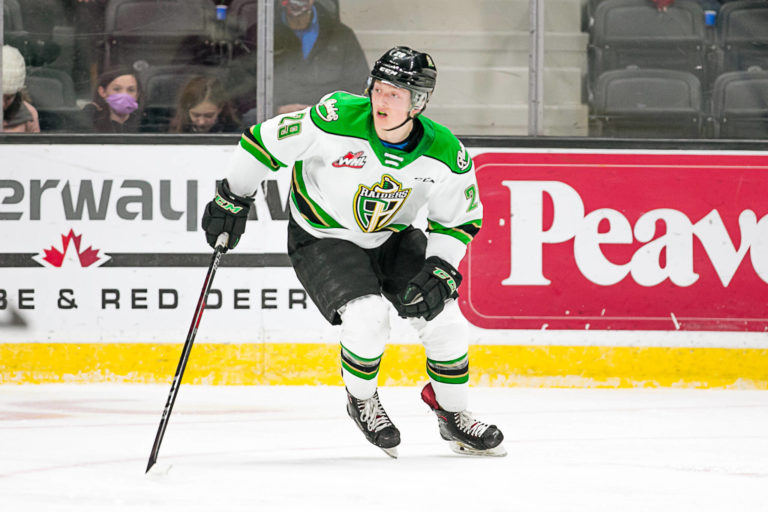 Red Deer’s Harrison Lodewyk took the next step in his hockey career this past year playing his first season in the Western Hockey League (WHL) with the Prince Albert Raiders.

Lodewyk now plays nearly 650 kilometres away from home but said he has learned a lot.

“It’s a very big change going from minor hockey to the WHL just to travel and everything,” he said. “We had a great group of older guys who taught me how to do things and overall I thought it was pretty good and just build on it for next year.”

He was selected in the second round of the 2020 WHL Bantam Draft 37th overall and Lodewyk said he was excited for the opportunity as the Raiders were one of the teams he was hoping to be selected by.

“I was just so pumped It’s a dream come true so yeah one of the happiest moments of my life,” he said.

The 17-year-old played in 55 games this season scoring two goals, two assists, and adding 16 penalty minutes. He also helped the Raiders earn a playoff spot where he took the ice for five games scoring a goal. The year prior Lodewyk was playing for the Red Deer Chiefs U18 AAA where he appeared in five games and contributed four points.

He said the biggest of adapting to the WHL game was the speed and the strength of the players.

“The biggest difference was you go into a corner and a guy who is four years older than you a 20-year-old, you just get manhandled because you’re not physically mature enough or up to his level,” he said. “Just playing with some NHL first-rounders is crazy.”

This offseason he plans to get stronger and really improve at everything because It’s such a high level of competition. More specifically his wrist shot, as well as thinking and skating faster on the ice. He will also be going to Toronto for a hockey camp with his agency to work on improving his game. He also plans to stay in Red Deer and go camping as well. The season was a learning process for the youngster and said he did his job and played his role to the best of his ability.

“Tried to win my matchups and be solid defensively for the team. Just making coach can roll the lines so the older guys can get rest,” he said.

Playing through the minor hockey system in Red Deer he said has made him into the player he is today and helped him get to the WHL.

The Raiders just sneaked into a playoff spot finishing fifth in the East Division with a 28-35-4-1 record losing in the first round to the Winnipeg Ice.

Lodewyk gave credit to the Raiders faithful saying it was crazy to play in front of the fans at the Art Hauser Centre.

“The playoffs, man it was nuts the crowd was chanting the whole time even when we lost 10-1 they were still into the game,” he added.

There were even a few times going through the Tim Hortons drive-thru someone ahead of him paid for his order after recognizing he was a Raider.

“It’s a great community. I love living there and the fans are amazing,” he added.

Lodewyk was also a finalist for the WHL’s Daryl K. Seaman Memorial Trophy for the Scholastic Player of the Year but ultimately lost to Kamloops Blazer Connor Levis.