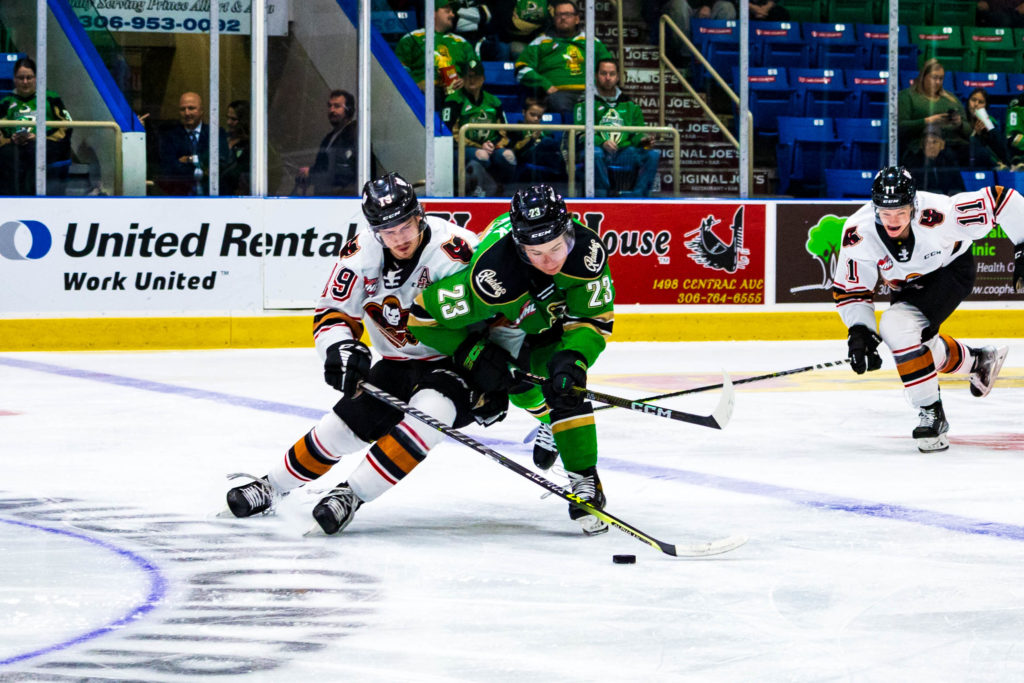 The Prince Albert Raiders kicked off their five game road trip with a 5-2 win over the Calgary Hitmen on Friday night. It’s the fourth win in a row for the Raiders, and the fifth win for the green and gold over their last six games. Sloan Stanick and Keaton Sorensen led the way offensively with four points each in the victory.

The Raiders opened the scoring 6:43 into the first period, as Owen Boucher scored his second goal of the season, and second goal in Calgary, to break the ice. Crashing the net, Boucher took a pass from Sloan Stanick from the far corner and fired a shot past Brayden Peters to give the Raiders a 1-0 lead early into the contest.

Just over three minutes later the Hitmen tied the score. Easton Kovacs turned the puck over trying to cycle the puck in the defensive zone, and Oliver Tulk intercepted a pass near the goal line. Tulk swung a pass in front for Trey Patterson, who skated low and fired a backhand shot that fooled Tikhon Chaika to even the score at 1-1 with his first goal of the season.

Patterson’s goal would be the last of the first period, as both teams went to the dressing room tied 1-1 after the opening 20 minutes, with the Hitmen leading 12-6 in shots.

The Hitmen took a 2-1 lead just 48 seconds into the second period, as they converted on a nice tic-tac-toe play. Riley Fiddler-Schultz started the play with a feed ahead for Tyson Galloway, who then sent a pass across the ice for Zac Funk. Funk cut across the crease with the puck and tucked a shot past Chaika, who was in the splits trying to make a highlight reel save. The early second period tally gave Calgary a 2-1 lead.

Midway through the middle frame, the Raiders tied the game. Evan Herman fired a long range shot that Peters stopped, but the rebound was sitting right in the blue paint. Keaton Sorensen came barging in to bury the rebound before it could be cleared by a Hitmen defender. His tenth goal of the season made it a 2-2 game.

The Raiders took their second lead of the night with 1:47 left in the second period, and it was Landon Kosior who put the visitors on top. Stanick led another rush into the zone, carrying the puck near the left corner by the net. Stanick sent a pass in front to Kosior, who banged home his tenth goal of the season. Easton Kovacs picked up an assist on the goal, giving him his second point in as many games in a Raider jersey.

The Raiders extended their lead to 4-2 early in the third period, as Sorensen picked up his second goal of the contest. Picking up his third assist of the night, Stanick set the goal up by wrapping around the Calgary goal and sending a pass to the goal mouth. Sorensen was waiting on the doorstep for the puck and banged home his 11th goal of the season. Evan Herman picked up his second assist of the night  on the goal as Prince Albert took a two goal lead just over five minutes into the final regulation frame.

The Raiders improved their lead to 5-2 midway through the third period, and it was captain Herman notching his 50th career goal. Stanick picked up his fourth assist of the night on the goal, while Sorensen tallied his fourth point of the night with an assist, grabbing two goals and two assists to that point in the game. Herman’s shot just trickled through Peters, giving the Raiders a commanding three goal lead with just over ten minutes left in regulation time.

The three goal lead proved to be more than enough, as the Raiders took a 5-2 win out of Calgary for their fourth straight victory. Chaika stopped 32 of 34 shots in goal for Prince Albert in the win, as the Raiders improved to 9-12-2-0 on the season.

Next up for Prince Albert is a trip to Red Deer on Saturday night for a meeting with the Rebels.