Raiders Use Special Teams to Take Down Blades 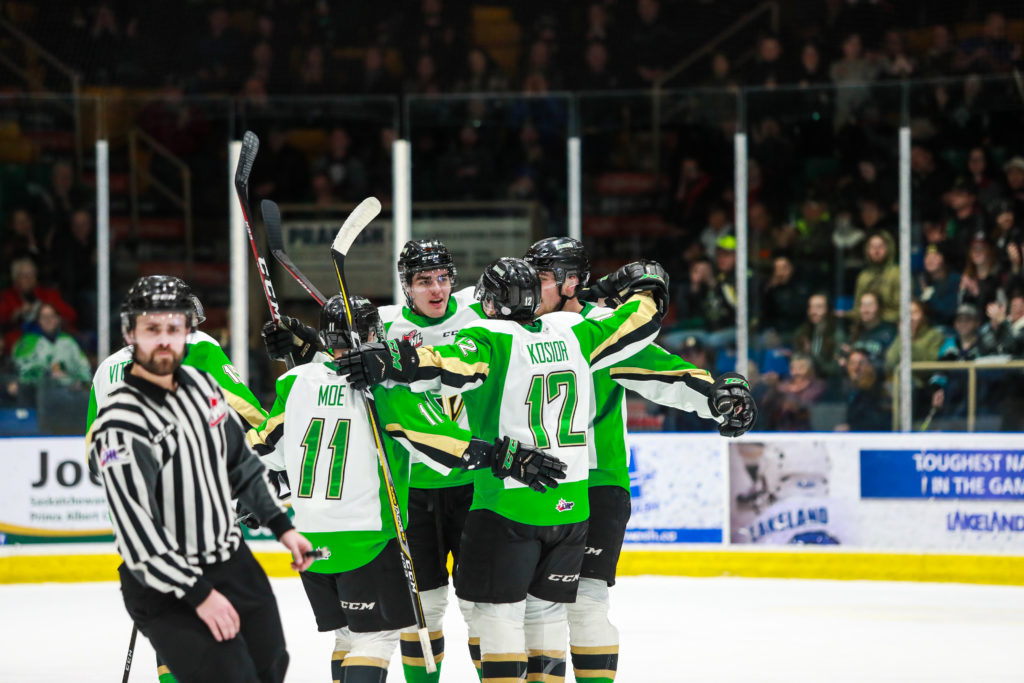 Prince Albert, SK  – Justin Nachbaur had two points and Max Paddock picked up his fifth shutout of the season as the Prince Albert Raiders (33-17-5-4) blanked the Saskatoon Blades (31-23-2-3) at the Art Hauser Centre on Saturday night.

The Raiders struck twice on the power play for the third time in four games. Nachbaur had a goal and an assist. Kaiden Guhle and Daniil Stepanov also scored for the Raiders.

Midway through the opening period, the Raiders got on the board with their first power-play goal of the period. The man advantage worked the puck to the point for Kaiden Guhle, who blasted a shot through Nolan Maier for his 10th goal of the season.

The Raiders added another power-play goal late in the frame. Landon Kosior got the puck at the point and put a shot towards goal through traffic. Nachbaur got his stick on the puck on its way to the goal, redirecting it past Maier for his eight of the year, putting the Raiders up 2-0 after 20 minutes.

The Raiders were all over the Blades in the opening period, outshooting the visitors 27-5. It was their highest shot total in a period this season and one off the franchise record of 28 set on March 14, 1990 against the Brandon Wheat Kings.

About six minutes into the second period, the Raiders struck again. Nachbaur waited behind the Blades’ goal with the puck. He spotted Daniil Stepanov coming off the bench and hit the Belarusian with a pass. Stepanov one-timed the pass past Maier to pick up his sixth goal of the year, giving the Raiders a 3-0 lead.

In the waning seconds of period, Paddock made his best save of the game to keep his shutout bid alive. On a Blades’ power play, he slid over to rob Chase Wouters at the top of the crease after a saucer pass from Kyle Crnkovic.

The Raiders locked down the Blades in the third period, holding Saskatoon to just four shots on goal in the final frame. The offence had a couple of great chances to extend the lead, but Aliaksei Protas hit the cross bar and Brayden Watts had his tipped shot in front of the net kicked away by Maier’s toe.

Paddock finished the game with 18 saves to pick up his third shutout since joining the Raiders and fifth overall. Maier stopped 40 shots in the loss.

The Raiders wrap up their three-in-three weekend on Sunday night at home against the Moose Jaw Warriors (14-39-4-0). Game time is 6 p.m. Tickets are available online here. The Box Office opens at 10 a.m. on Sunday morning.