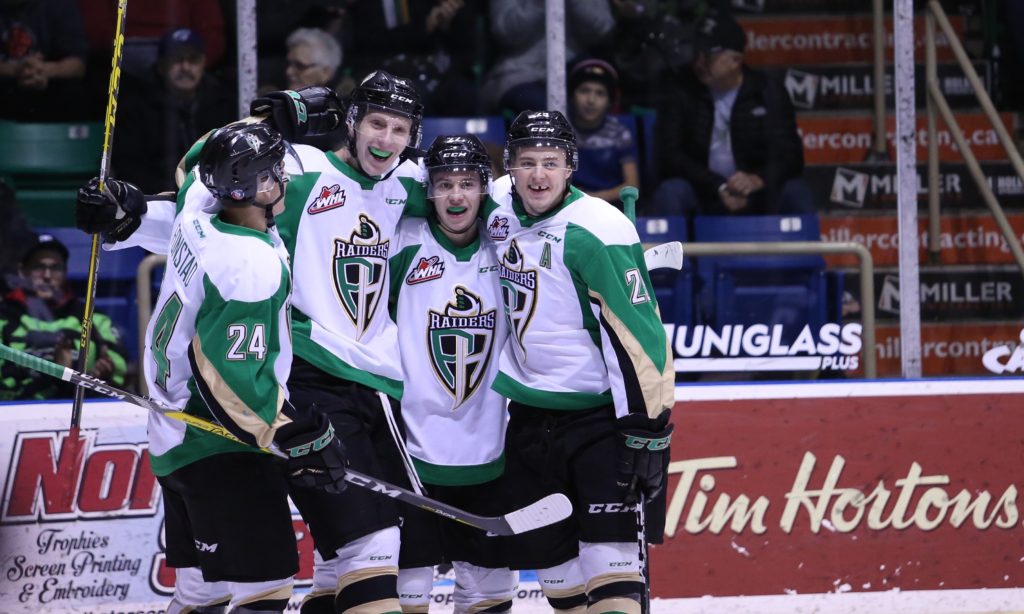 The balanced attack led a shorthanded Raiders side to their first win over their division rivals this season. The Raiders were without the services of Vojtech Budik, Simon Stransky (both World Juniors), Austin Glover (illness) and Spencer Moe.

The Raiders jumped on the Blades early, opening the scoring at the 4:35 mark. Cody Paivarinta wired his first career WHL goal past goaltender Logan Flodell, who shut the Raiders out in the first two meetings between the teams this season.

Cody Paivarinta was quite excited after getting his first WHL career goal pic.twitter.com/hHj6mqK8vv

Luke Coleman extended the Raiders’ lead to two with his sixth of the campaign with 7:36 left in the first. Then, with 4:15 remaining, Cole Fonstad unleashed a power-play slap shot that beat Flodell to put the Raiders up 3-0. However, Logan Christensen cut into the Raiders’ lead with a shorthanded goal late in the frame, making it a 3-1 game after 20 minutes.

In the second, Drew Warkentine found the back of the net with 3:03 remaining to restore the Raiders’ three-goal advantage. The Blades cut back into the lead when Braylon Shmyr beat Ian Scott on a two-man advantage with 55 seconds left in the period.

Cavin Leth put the Raiders up by three again 5:32 into the third period. He took a pass from Parker Kelly and was off on a breakaway, beating Flodell before getting tripped up and crashing into the Blades’ netminder. Shmyr notched his second of the game at the 8:05 mark to make it a 5-3 game, but the Raiders held on for the win.

Scott stopped 38 shots for the Raiders in the win. Flodell made 27 saves in a losing effort.

It’s a quick turnaround for both teams as they close out the home-and-home series tomorrow night in Saskatoon at the SaskTel Centre in a 7 p.m. contest. The Raiders return home on Friday to tangle with the East Division-leading Regina Pats at the Art Hauser Centre. Puck drop is 7 p.m. For tickets, click here, the Raider Office or call 306-764-5348.