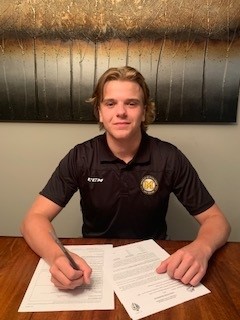 The Prince Albert Raiders are happy to announce the signing of 2007-born forward Oli Chenier to a WHL Standard Player Agreement.

Chenier was selected in the third round of the 2022 WHL Prospects Draft by the Raiders, and was one of four Winnipeg-born players taken by Prince Albert in the draft. He spent the 2021-22 season with the U15AAA Winnipeg Wild. The 15-year-old amassed 52 points (30G-22A) in 27 games with the club.

“Oli’s a high IQ player and a hard competitor who makes quick decisions,” Raiders director of player personnel Bruno Zarillo described Chenier. “He reminds me of Ozzy Wiesblatt. He’s got a lot of upside and he’s going to be an exciting player to watch.”

Chenier became the third player from the 2022 WHL Prospects Draft to sign with the Raiders, joining Ryan Gower, who was selected in the second round, and Luke Moroz, who was taken 15th overall.