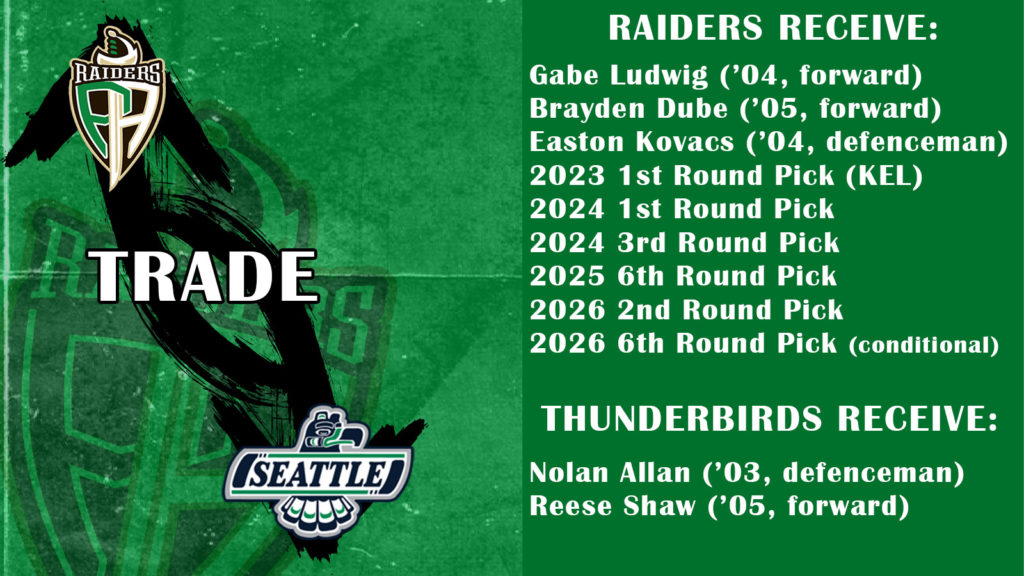 The Prince Albert Raiders have completed a trade with the Seattle Thunderbirds, sending defenceman Nolan Allan (’03) and the rights to Reese Shaw (’05) out west.

“We’re a third of the way through the season and we are on the outside looking in,” general manager Curtis Hunt said. “I believe this trade gives us better depth in our forward group and adds speed and skill up front.

“These draft picks allow us to further supplement our group as we work through the holiday season towards the (trade) deadline, in the event that there is an opportunity to make our group that much better again.”

Ludwig, a left winger from Eagle River, Alaska, is in his third WHL season. Through 15 games this year, the 18-year-old has three goals and two assists. In 93 career WHL games, Ludwig has 24 points (9G-15A).

Dube, a right winger who hails from Roblin, MB, is playing in his first WHL season. So far this year, the 17-year-old has two goals and two assists in 14 games. Prior to that, Dube played for the Dauphin Kings of the MJHL last season, registering 46 points (24G-22A) in 49 regular season games, adding on another nine points in 16 playoff games.

Kovacs, a big 6’4 defenceman, is in his third WHL season, and will be playing for his third team. He originally started out with the Lethbridge Hurricanes, playing 57 games, before being traded to Seattle this past off-season. The Delta, B.C. product has an assist in 10 games this season.

Going the other way to Seattle is Raider captain Nolan Allan, who is a veteran of 162 WHL games. Allan was named captain of the Raiders this season after returning from Chicago Blackhawks training camp. Through 16 games this season, the NHL first round pick has 11 points (4G-7A). In those 162 career games, he has 63 career points (14G-49A) with a +4 rating.

Also heading to Seattle is the rights to Reese Shaw, a forward currently playing with the New Mexico Ice Wolves in the North American Hockey League (NAHL). Shaw was selected by the Raiders in the 2020 WHL Prospects Draft, but has remained playing in Minnesota.

“You can’t replace Nolan Allan,” Hunt said. “But Easton is a player that can play a physical, stay at home type of game. The rest of the group is going to have to step up and fill those minutes. I think collectively, we should be a little better as an entire group. We’re inserting some energy and some pace up front.

“The goal remains the same, and that’s to get ourselves into the postseason.”