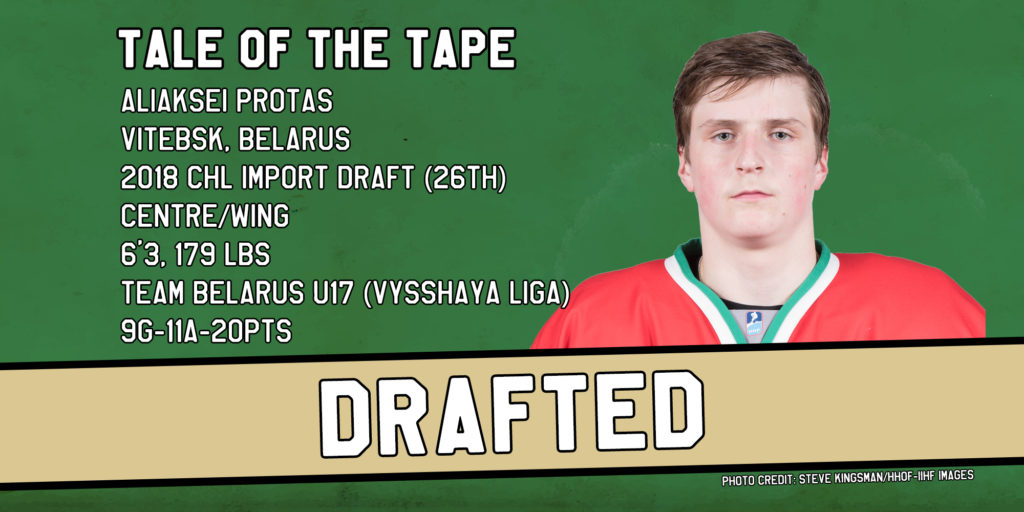 Prince Albert, SK – The Prince Albert Raiders are pleased to announce the selection of 2001-born forward Aliaksei Protas with the 26th overall pick in the 2018 CHL Import Draft.

Protas, who hails from Vitebsk, Belarus, is listed at 6’3” and 179 lbs. He suited up for the Belarus U17 Team in the Vysshaya Liga, which is the development league for the Belarusian Extraleague. In 49 games, he scored nine goals and added 11 assists.

“Aliaksei is a versatile player who can play on the wing or at centre,” Raiders General Manager Curtis Hunt said. “He fills a couple of needs for us. He can come in and play centre and provides size up front.”

Internationally, Protas represented his country at the 2018 IIHF World U18 Championship in April. He scored a goal and chipped in three assists in five games at the tournament as Belarus was eliminated in the quarter-finals by Finland.

He also had a goal and three assists in five games at the 2018 World U18 Hockey Championship. Take a look at the goal 👇 pic.twitter.com/BPcKc59gfD

“We were lucky to see him play live at the Mac’s Tournament,” said Hunt. “He’s already played meaningful minutes, whether it was at the Mac’s or at the World U18s. He’s also already tried out for Belarus’ World Junior team. We’re excited to get him here and continue his development.”