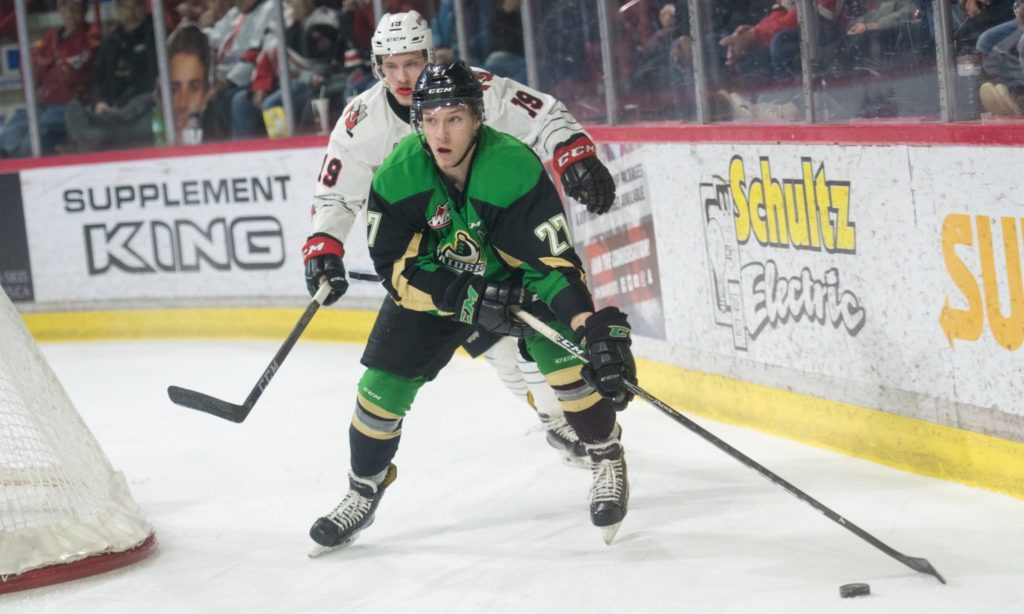 Moose Jaw, SK – Th Prince Albert Raiders pushed the top-seeded Moose Jaw Warriors to the limit, but couldn’t finish off the upset in a 5-4 loss at Mosaic Place on Tuesday night.

With the loss, the Raiders dropped the best-of-seven series 4-3 and were eliminated from the playoffs.

The Raiders got out to a flying start in the first period. Justin Nachbaur deflected Zack Hayes’ point shot past Brody Willms to open the scoring at the 1:28 mark.

Scores! @Jnacks55 with the deflection!

Less than five minutes later, Parker Kelly found a loose puck in a scramble in front of the Warriors’ goal and put it into the empty cage to make it 2-0.

Scores! @Parks_17 pots one off a turnover!

Shortly after, the Warriors responded. Jayden Halbgewachs collected his rebound and slid the puck through Ian Scott to make it a 2-1 game. Twenty-five seconds later, Vojtech Budik’s clearing attempt from the side of the goal ricocheted off Ryan Peckford, a Raider in front and past Scott to tie the game.

Midway through the frame, the Raiders took the lead back. With the teams playing four-on-four hockey, Kelly turned the corner on Kale Clague and slid the puck through Willms before crashing into the net. The play was reviewed, but eventually called a goal to put the Raiders up 3-2 after 20 minutes.

Early in the second, the Warriors appeared to tie the game when Peckford’s deflection got past Scott. However, the play was reviewed and it was determined the Warriors forward touched the puck a high stick.

Late in the period, Moose Jaw found their equalizer. Justin Almeida buried a cross-ice pass from Brayden Burke on the power play to tie it up at 3-3.

In the third, the Raiders had two golden opportunities to regain the lead. Three minutes into the frame, Curtis Miske was tied up on a shorthanded breakaway, resulting in a penalty shot. On his attempt, the Raiders captain beat Willms but not the post.

A few minutes later, with Peckford already in the box for delay of game, Josh Brook tripped up Kody McDonald to set up a two-man advantage for the Raiders. However, they couldn’t get a puck past Willms and the Warriors killed off both penalties.

Shortly after Moose Jaw killed off the penalties, the Raiders found themselves on the penalty kill. On that power play, Almeida beat Scott once again for his second of the game to give the Warriors the 4-3 lead.

Late in the third with the Raiders pressing, Sean Montgomery was assessed a checking from behind penalty. On that penalty kill, Brayden Pachal broke in shorthanded and picked the corner on Willms to tie the game with 4:20 to play.

The celebration was short lived. Thirty seconds later, Brayden Burke tallied his sixth goal of the series with a wrister from the top of the slot to restore Moose Jaw’s one-goal lead.

The Raiders pulled Scott for the extra attacker with 2:35 to play, but were unable to find the equalizer.

Handshakes to end the season.

Scott made 21 saves in a losing effort for the Raiders, closing out his post-season with a 3-2-2 record. Willms stopped 24 shots, including 12 out of 13 faced as the Raiders pressed in the third.

Season tickets for the 2018-19 campaign are available for purchase. Visit the Raider Office or call 306-764-5348 for more information.