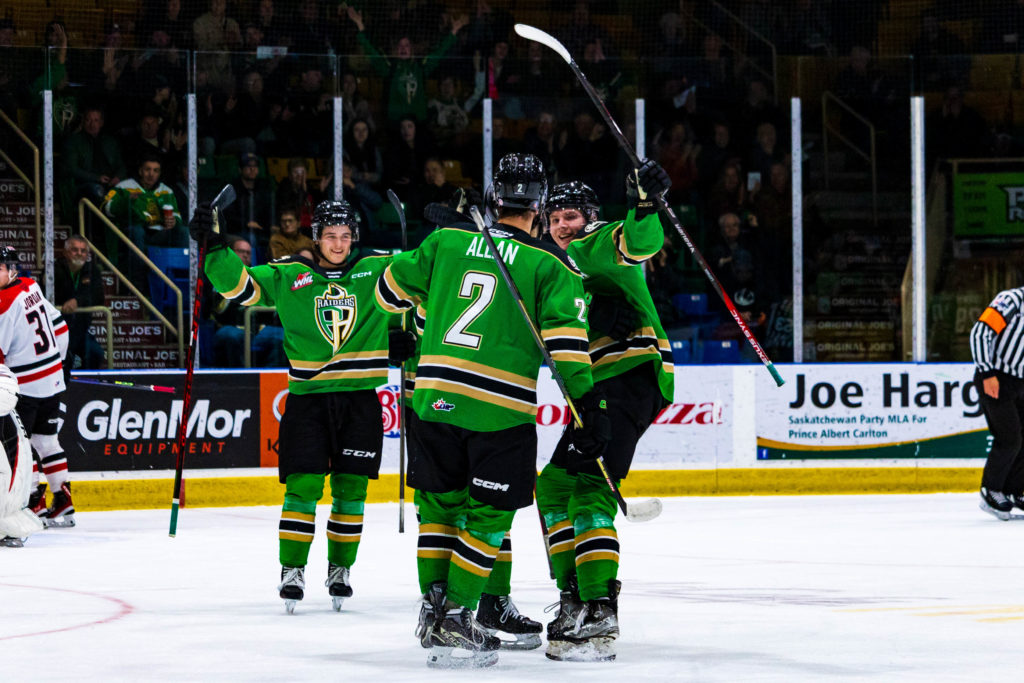 The Prince Albert Raiders picked up their second win in a row, downing the Warriors 2-1 on Tuesday night in Moose Jaw. It’s the team’s third win over their last four games.

The Raiders opened the scoring 8:05 into the first period on their second powerplay of the game. Nolan Allan sent a pass from the point to the right circle to Landon Kosior. Instead of shooting the puck like he usually does from his office, Kosior sent a pass to the slot for Keaton Sorensen, who rocketed a one timer past Warriors keeper Jackson Ungar. Sorensen’s ninth goal of the season put the Raiders up 1-0.

Prince Albert thought that lead had gone up to 2-0 midway through the frame as Eric Johnston scored on a rebound chance. However, the Warriors challenged the goal for offside, and after a video review, the call was overturned, and the lead remained 1-0, which is how the score would ready after 20 minutes.

Carson Latimer made it a 2-0 Raiders lead 5:14 into the second period after stealing the puck from a Warrior skater. Latimer raced into the blue line and on a partial breakaway, the forward beat Ungar for his seventh goal of the season to double Prince Albert’s lead.

Late in the second, the Warriors finally found their first goal of the game on their first powerplay of the contest. Brayden Yager slipped a pass over to Warriors captain Denton Mateychuk, who had an angle below the right circle. Mateychuk buried a shot low past Max Hildebrand to cut into the lead, as his fourth goal of the season made it a 2-1 game with 2:27 left in the middle frame.

The Raiders finished 40 minutes of the game outshooting Moose Jaw 22-9, and went into the third and final regulation frame holding onto a 2-1 lead.

The Warriors put together their best period of the game in the third, with nine shots on goal, but none of them beat Hildebrand. The Warriors had a chance to tie the game with over three minutes left in regulation on the powerplay and with an extra attacker with the goalie pulled, but Hildebrand made a huge save near the end of the game to preserve the Raiders’ 2-1 lead, and secure the win.

The Raiders netminder stopped 17 of 18 shots for his second win of the season, as the Raiders improved to 7-12-2-0 in the campaign. Ungar put in a solid performance for the Warriors, stopping 20 of 22 shots in the loss for Moose Jaw.

Next up for Prince Albert is a home date with the Medicine Hat Tigers on Saturday night. It’s Pack the Pickup night in support of the SPCA brought to you by Mann Northway. Puck drop is 7pm.