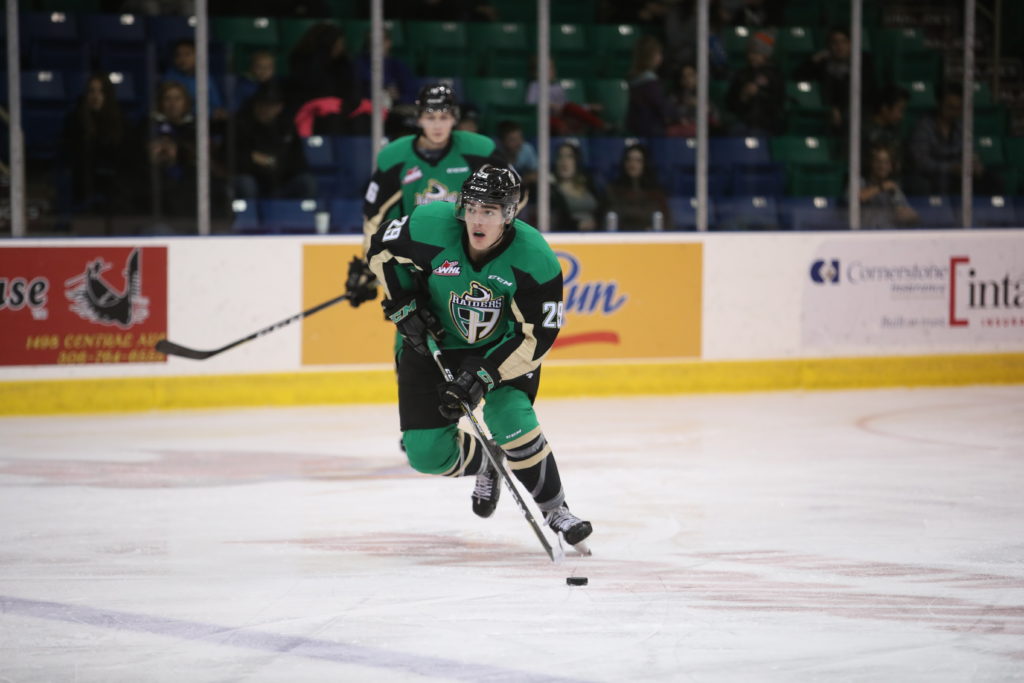 Cranbrook, BC – The Prince Albert Raiders (8-6-3-0) scored four first-period goals and didn’t look back in a 5-3 win over the Kootenay ICE (8-10-1-0) on Friday night at Western Financial Place to kick off their six-game road trip.

Justin Nachbaur got the game’s first goal at the 8:21 mark of the first period. Less than two minutes later, Sean Montgomery notched his sixth goal of the season to put the Raiders up 2-0.

With 6:48 to play in the first frame, Nachbaur scored his second of the game. Jordy Stallard chipped a pass up to Nachbaur, who was exiting the penalty box. The Cross Lake, MB product wired a shot past ICE netminder Bailey Brkin to make it 3-0. Stallard also extended his point streak to 10 games with the assist.

Then with 4:00 to play in the first, Cole Fonstad tallied a power-play goal to put the Raiders up 4-0. It was an efficient offensive performance in the period as the Raiders had just six shots on goal in the period.

In the second, Kootenay got on the board midway through the period on Dallas Hines’ goal with a two-man advantage. Two minutes later, Alec Baer solved Ian Scott to make it a 4-2 game.

The Raiders restored their three-goal lead later in the frame. Spencer Moe was hauled down, but still managed to get the puck past goaltender Duncan McGovern for his third of the season.

The ICE got the game back within two again on Colton Veloso’s marker in the third period, but it was as close as the home team came.

Scott earned his fifth win of the season with a 36-save performance. McGovern made 22 saves in relief.

The Raiders head south as they take on the Portland Winterhawks (12-4-0-0) on Sunday at the Moda Center. Game time is 7 p.m. CST. The next Raiders’ home game is on Friday, November 24 against the Swift Current Broncos on 80s Night Presented By Canadian Tire. Tickets are available at raiderhockey.com.