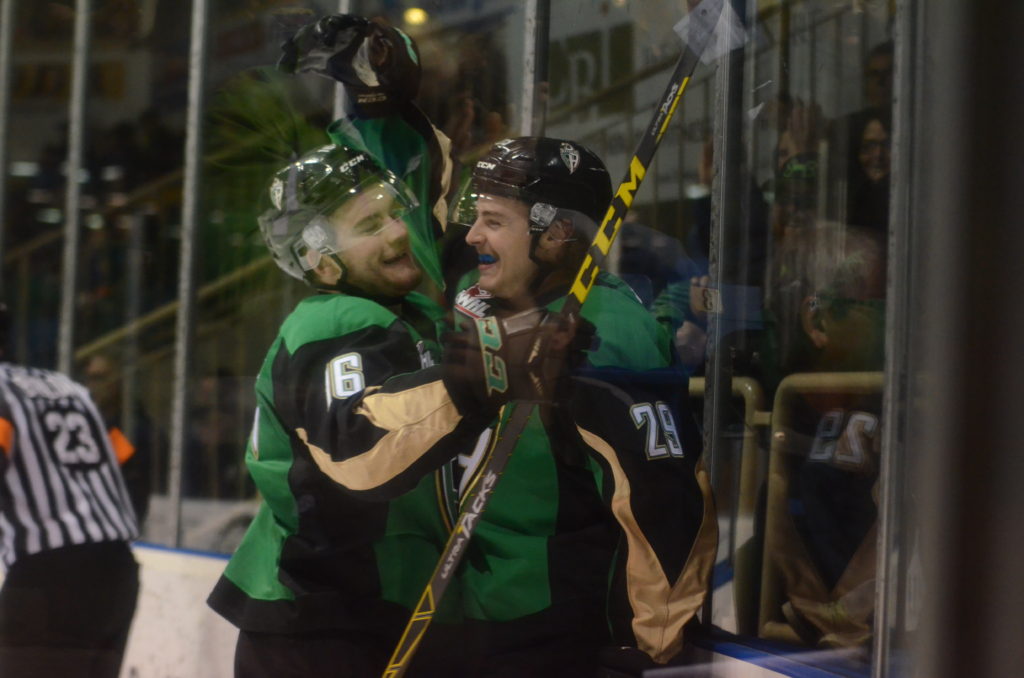 He banged home a rebound from the top of the crease to give the Raiders their third overtime victory of the season.

Following a scoreless first period, the Oil Kings struck first at the 4:04 mark of the second period when Lane Bauer finished off a pretty passing play. The Raiders’ offence came to life in the second half of the frame. Nick Heid scored the first goal of his 105-game WHL career to tie the game with 6:13 left in the period. Cavin Leth gave the Raiders the lead with 57 seconds left in the middle frame, beating Patrick Dea through the five hole on a power play.

Early in the third, Aaron Irving tied the game again for Edmonton with a power-play goal of his own at the 3:58 mark. Less than three minutes later, Drew Warkentine tallied his first goal of the season with a power-play marker to put the Raiders up 3-2. However, the Oil Kings tied it with 5:23 left in regulation on Will Warm’s third goal of the game.

That set up Glover to play the overtime hero. He grabbed a rebound off of Zack Hayes’ point shot and had two whacks at the puck to end the game.

Ian Scott stopped 32 shots to pick up the win for the Raiders. Dea made 25 saves in a losing effort for the Oil Kings.

Up next for the Raiders is another trip to Moose Jaw to take on the Warriors on Wednesday night at Mosaic Place in the fourth meeting between the two teams this month. The next and final home game for the Raiders before the holiday break is on Saturday night against the Swift Current Broncos, capping off a home-and-home series between the clubs. Puck drop is 7 p.m. at the Art Hauser Centre. Tickets are available here, at the Raider Office or by calling 306-764-5348.