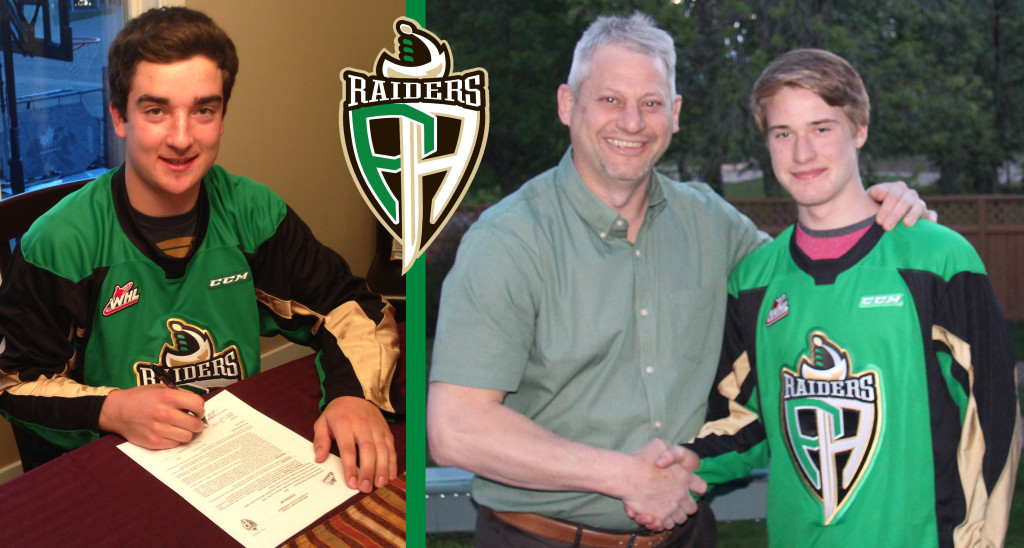 Herold, who was selected by the Raiders with the 35th overall pick in the 2016 WHL Bantam Draft, suited up for the Balgonie Prairie Storm in the Saskatchewan Bantam AA Hockey League (SBAAHL) during the 2015-16 season. In 29 games, the Montmartre, SK product had 11 goals and 18 assists. He added a goal in four playoff contests with the club.

Extremely happy to have signed with the Prince Albert Raiders. Thanks to everyone who helped make this happen. pic.twitter.com/fBTPyyRIDO

“Adam is the type of character kid we love to draft,” said Raiders Director of Player Personnel Ron Gunville. “He brings a two-way game with some offence as well as being very physical. Adam has great leadership ability and could wear a letter someday as a Raider.”

Pearce, a Regina, SK product, was picked with the 42nd overall selection. He tallied 51 goals and 20 assists in 30 games during the 2015-16 season with the SBAAHL’s Regina Aces. In the post-season, he netted seven goals and six assists in four games. Pearce also played five games with the Regina Pat Canadians of the Saskatchewan Midget AAA Hockey League, chipping in two assists.

“Eric is an offensive player,” Gunville said. “He has the ability to score goals in many different ways. Eric possesses a great shot to go along with his skating ability and size. Eric has the potential to be a dominant power forward as his game develops and matures.”

Prince Albert Raiders 2016-17 season tickets are on sale now with early bird pricing available until June 15. To order, visit the Raider Office at the Art Hauser Centre or head to raiderhockey.com.