Raiders Give Up Third Period Lead In Loss 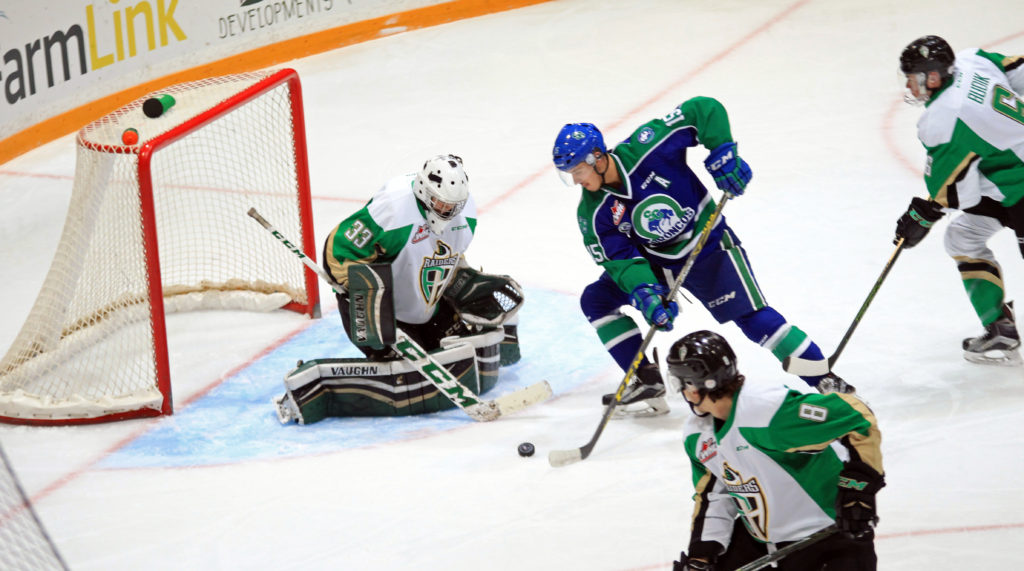 Swift Current, SK – The Prince Albert Raiders (2-5-0-0) surrendered a third-period lead in Swift Current on Saturday night, losing a 4-3 game to the Broncos (5-2-0-1) at the Credit Union I-Plex.

With 3:24 remaining in the third, Calvin Spencer beat Raiders goaltender Ian Scott with a goal that held up as the game winner.

The Broncos jumped all over the Raiders to open the game, leading to Arthur Miller opening the scoring at the 2:42 mark. Scott did all he could to keep it a one-goal game during the first 20 minutes, including turning aside a shorthanded breakaway. Shortly after that stop, Tim Vanstone solved Broncos netminder Taz Burman to make it a 1-1 game heading into the second period. Scott was the busier of the two goaltenders in the first 20 minutes, making 19 saves for his team.

In the second, Max Lajoie restored the Broncos’ lead seconds after a Raiders penalty expired at the 6:38 mark. Less than two minutes later, Luke Coleman scored his first goal of the season on a beautiful redirection of Loch Morrison’s point shot through Burman’s legs.

Austin Glover gave the Raiders their first lead of the game early in the third period. On the power-play, he deflected Vojtech Budik’s shot past Burman at the 4:15 mark. Just more than two minutes later, Riley Stotts leveled the game for the Broncos on a power-play goal of their own. That set up Spencer to play hero off of a Raiders’ turnover, who buried a one-timer past Scott and into the top corner.

Scott finished the game with 35 saves in the game in a losing effort. Burman made 29 saves for the Broncos in the win.

Next up for the Raiders is a Friday night match-up with the Wheat Kings in Brandon. Game time is 6:30 p.m.

The next Raiders’ home game is on Saturday, October 15 against the Wheat Kings, finishing off a home-and-home series. That game is the Raiders’ Pink In the Rink Night. The Raiders will be donating $1 from every ticket sold to Victoria Hospital. There will also be haircuts — $10 for adults, $5 for children – in the Johnny Bower Lobby courtesy of Hair Revolution. In addition, if fans raise $2,500, captain Tim Vanstone will shave his head following the game. Tickets are available at the Raider Office, by calling 306-764-5348 or by clicking here.