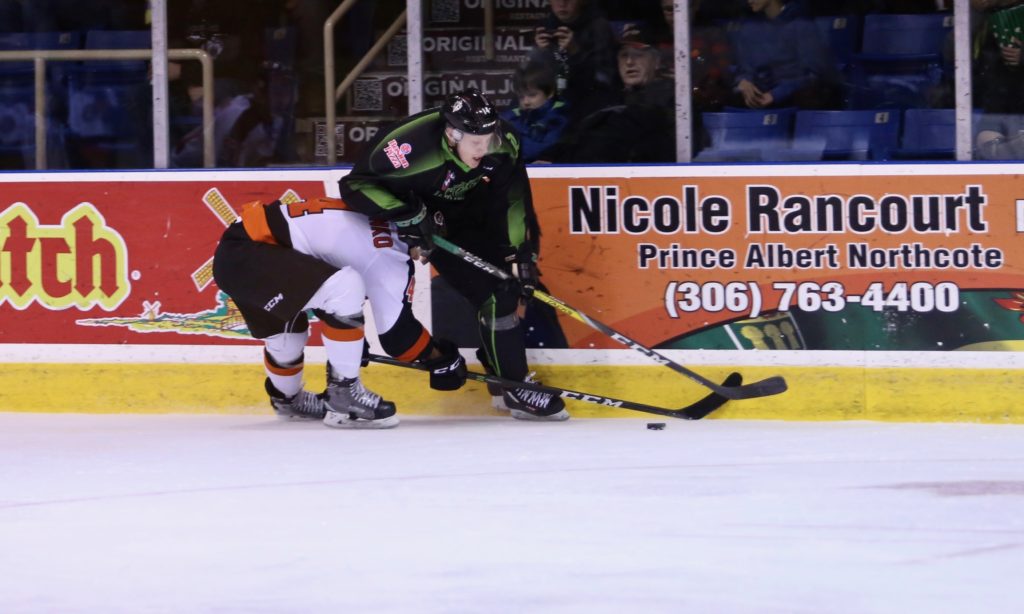 The Tigers opened the scoring midway through the first period when Matt Bradley pounced on a rebound in front of the net to beat Raiders netminder Nicholas Sanders.

In the second, an early period power play for the Raiders resulted in a shorthanded goal for Medicine Hat. A point shot deflected off of a Raiders’ player in front of the net and cleared the zone. Mark Russell ended up being the beneficiary, scoring the goal down a man. Four minutes later, Steven Owre increased the Tigers’ lead to 3-1.

30 seconds later, the Raiders got on the board. Cole Fonstad was sprung on a breakaway by Carson Miller. The Raiders rookie made a move to his backhand and slid the puck through the five-hole of Tigers goaltender Duncan McGovern.

Gary Haden restored the Tigers’ three-goal lead at the 10:38 mark of the period. Then, Zach Fischer scored to make it a 5-1 game, ending Sanders’ night. The Raiders netminder stopped 12 shots before being pulled. About three minutes later, Max Gerlach scored to put the Tigers up 6-1 after two periods.

In the third, James Hamblin beat Ian Scott at the 1:56 mark to give the Tigers the 7-1 win.

Scott stopped 12 of 14 shots faced after taking over for Sanders. McGovern made 22 saves for the Tigers in the win.

The Raiders hit the road for a mid-week trip to Alberta, which begins on Tuesday night in a rematch with the Tigers in Medicine Hat. Puck drop is at 8 p.m. The next Raiders’ home game is on Friday, December 2 against the Moose Jaw Warriors. Puck drop is 7 p.m.