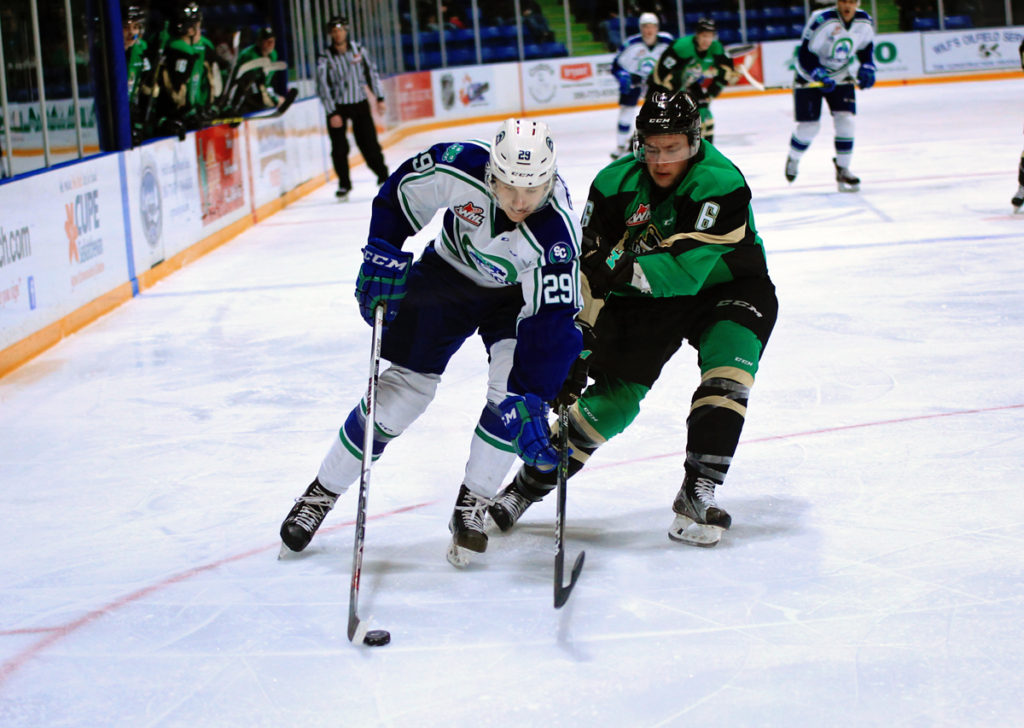 Swift Current, SK – The Prince Albert Raiders (8-31-1-2) continue to have problems with the Swift Current Broncos (23-12-3-4). On Saturday night, the Raiders were downed 5-2 by the Broncos in Swift Current at the Credit Union i-Plex.

It was the Raiders’ sixth loss to the Broncos in as many games this season.

The Raiders got off to a strong start in the game, opening the scoring midway through the first period. Kolten Olynek got his first since returning to the Raiders, jumping on a loose puck in the crease to make it a 1-0 game. The Broncos tied it with 6:06 to play in the period when Calvin Spencer beat Ian Scott. Swift Current took the lead with 32 seconds left in the first period when Arthur Miller scored his fifth of the season.

Following a second period with no scoring, Ryan Graham increased the Broncos’ lead to 3-1 with a goal 1:24 into the third. The Raiders got back within one at the 6:20 mark of the third. Simon Stransky picked the corner on the power play for his 13th goal of the season. However, it was as close as the Raiders got. Tyler Steenbergen made it a two-goal game and Aleksi Heponiemi scored into an empty net to make it a 5-2 final.

Scott made 33 saves in the loss for the Raiders. Burman stopped 24 Raider shots to pick up the win for the Broncos.

The Raiders begin a busy week of action on Wednesday night when they host Matteo Gennaro and the Calgary Hitmen. Puck drop is 7 p.m. It’s the first of four games next week, including home games on Friday night and Sunday afternoon against the Red Deer Rebels and Regina Pats, respectively. Tickets are available here, the Raider Office or by calling 306-764-5348.