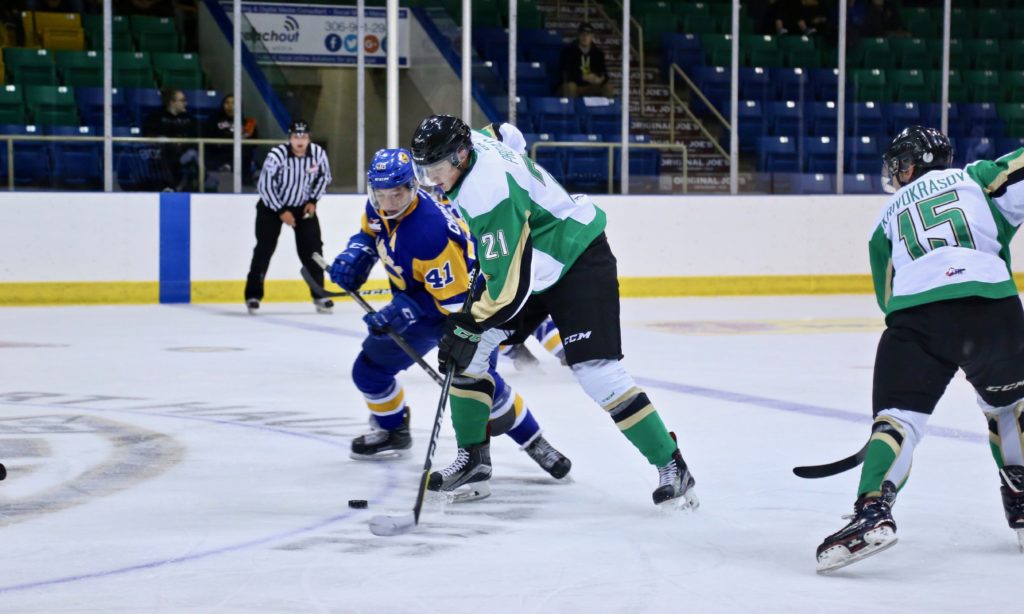 Prince Albert, SK – The Prince Albert Raiders dropped their second straight game to open the 2018 WHL Pre-season, falling 6-3 to the Saskatoon Blades on Thursday night at the Art Hauser Centre.

A tight-checking first period led to no scoring between the two rivals, but the Blades fired nine shots at recently-acquired Donovan Buskey.

In the second, the Blades opened the scoring at the 6:26. Josh Paterson got past the Raiders defence and slid the puck through Buskey for a shorthanded tally. Four minutes later, Bradly Goethals redirected a point shot into the back of the Raiders’ net to give the visitors a 2-0 lead.

The Raiders responded by taking advantage of a full two-minute, five-on-three opportunity. Max Martin cut the Blades’ lead in half with a laser from the top of the slot. Twenty-two seconds later, Carson Miller finished off a cross-crease pass from Aliaksei Protas to tie things up at 2-2.

Before the end of the frame, Kirby Dach gave the Blades the lead again. His goal with 2:41 to play in the second put his side up 3-2.

Saskatoon struck twice early in the third. Michael Farren took a pass from behind the Raiders’ net and beat Buskey at the 1:11 mark. A minute later, Braden Plaschewsky scored in a similar fashion to make it a 5-2 game.

At the 7:10 mark, Goethals netted his second of the game when he forced a turnover at the top of the slot.

With 7:22 remaining, Brett Leason cut into the Blades’ lead. He snapped a shot past Blades goaltender Dorrin Luding to cut the lead to 6-3. However, it was as close as the Raiders got on the evening.

Buskey made 17 saves in his first start, albeit exhibition, with the Raiders. Luding stopped 16 shots to pick up the win.

Up next for the Raiders is a trip to Warman to take on the Saskatoon Blades at The Legends Centre on Saturday night. Puck drop is 7 p.m.

The next Raiders’ home game is their final pre-season contest on Saturday, September 15 at the Art Hauser Centre against the Saskatoon Blades. Tickets are $10 for adults and $5 for fans 18 and under. Puck drop is 7 p.m.

After that, the games count for real. The Raiders open the 2018-19 WHL Regular Season on Friday, September 21 when the Regina Pats visit the Art Hauser Centre. Single-game tickets are now available here.