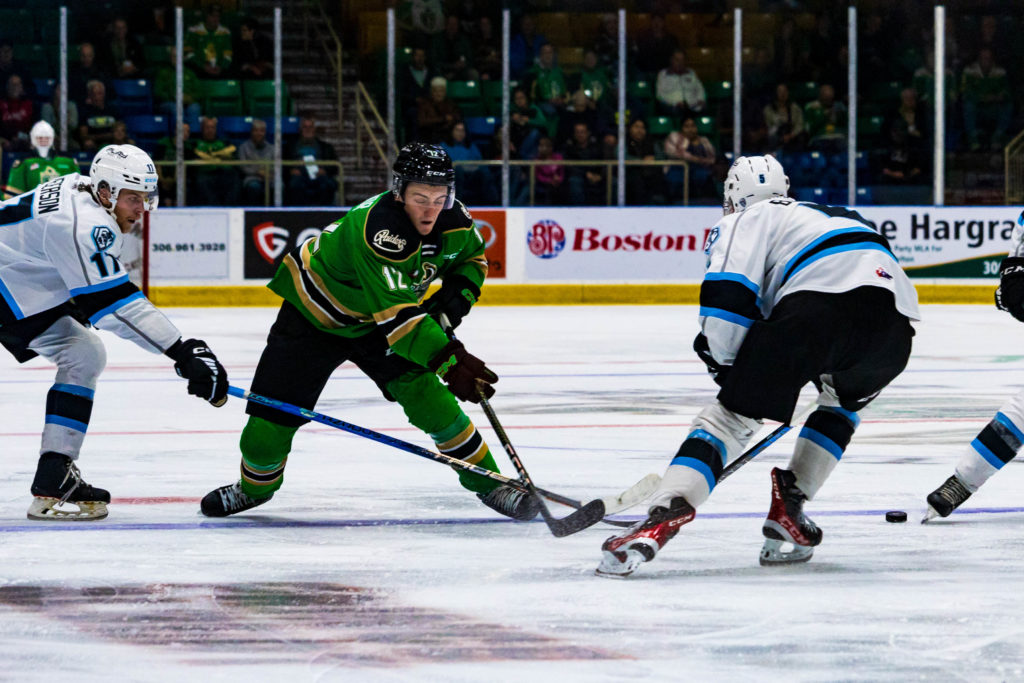 The Prince Albert Raiders couldn’t contain the firepower of the Winnipeg ICE on Saturday night, dropping a 6-4 contest to wrap up their five game road trip. The win for Winnipeg snapped a two game losing streak, while the Raiders dropped their second straight game. Conor Geekie and Matthew Savoie each scored twice for Winnipeg, while four different Raiders found the goal sheet.

The ICE scored 3:18 into the first period, right after their first powerplay of the game expired. Owen Pederson sent a feed to the slot from the right corner to Conor Geekie. With pressure coming from a Raider defender, Geekie fired a laser shot that beat Raider starter Max Hildebrand on the blocker side. Geekie’s 14th goal of the season gave Winnipeg an early 1-0 lead.

Brayden Dube tied things up for the Raiders with 5:43 to go in the first period. Cole Peardon started the play with a nifty deke stepping into the offensive zone, before throwing a pass in front. Crashing the goal, Dube was able to pick up the puck and tuck home his third goal of the season, and first in a Raider jersey, as he tied the game at 1-1.

That tie didn’t last long however, as the ICE responded just 17 seconds later. Breaking into the Raider zone, Ben Zloty feathered a pass across for Zach Benson. Wasting no time with the puck, Benson wired a shot past Hildebrand for his 15th goal of the season, as Winnipeg took their lead right back at 2-1.

Less than three minutes later, Winnipeg’s lead was extended to 3-1, as Matthew Savoie got in on the scoring action. Taking a pass from Ty Nash at the left circle, Savoie ripped a shot far side on Hildebrand, beating the netminder top corner for his 11th marker of the season. Late in the opening frame, the ICE took momentum in the game, going up by a 3-1 clip, which is how the first period would end.

Just 22 seconds into the second period, Sloan Stanick scored the first goal of the middle frame to cut the Winnipeg lead to 3-2. Stanick took a pass from Keaton Sorensen at the left circle and fired a shot far side past Mason Beaupit. His ninth goal of the season was a big one as it brought the Raiders right back into the game, making it a one goal game.

Six minutes later, the ICE restored their two goal lead. Nash slid a pass across for Zloty in the slot, and the alternate captain fired a shot shortside past Hildebrand’s blocker. Zloty’s seventh goal of the campaign gave the ICE a 4-2 lead.

Both teams saw powerplay opportunities throughout the rest of the second period, but failed to find any more goals. That is until 14 seconds showed on the score clock. A point shot from Landon Kosior was tipped in front by Carson Latimer, who’s redirection beat Beaupit. Latimer’s eighth goal of the season once again made it a one goal game, this time a 4-3 Winnipeg lead. That’s how the score would read as the second period came to a close, with the ICE leading in shots 25-17.

6:35 into the third period, the Raiders tied the score on the man advantage. A centering feed from Keaton Sorensen found Ryder Ritchie in front on the doorstep, and the rookie tapped home his fourth goal of the season. The tally gave Ritchie goals in back to back games, but more importantly, it tied the game up at 4-4 still early in the third period.

After going 0-for on the powerplay so far in the game, the ICE finally scored on their eighth powerplay of the game, and it couldn’t have come at a worse time for the Raiders. It was Conor Geekie who fired home his second goal of the night from the slot to give Winnipeg a late 5-4 lead. To add on to that, with just 1:08 left, Matthew Savoie scored to put the game away, putting Winnipeg up by a 6-4 spot, which would be the final.

Hildebrand stopped 25 of 31 shots in goal in the loss for the Raiders, while Beaupit turned aside 21 of 25 shots in the win for Winnipeg.

The Raiders (10-15-2-0) return home for five straight games before the holiday break, starting on Wednesday night against the Brandon Wheat Kings. Puck drop is 7pm.