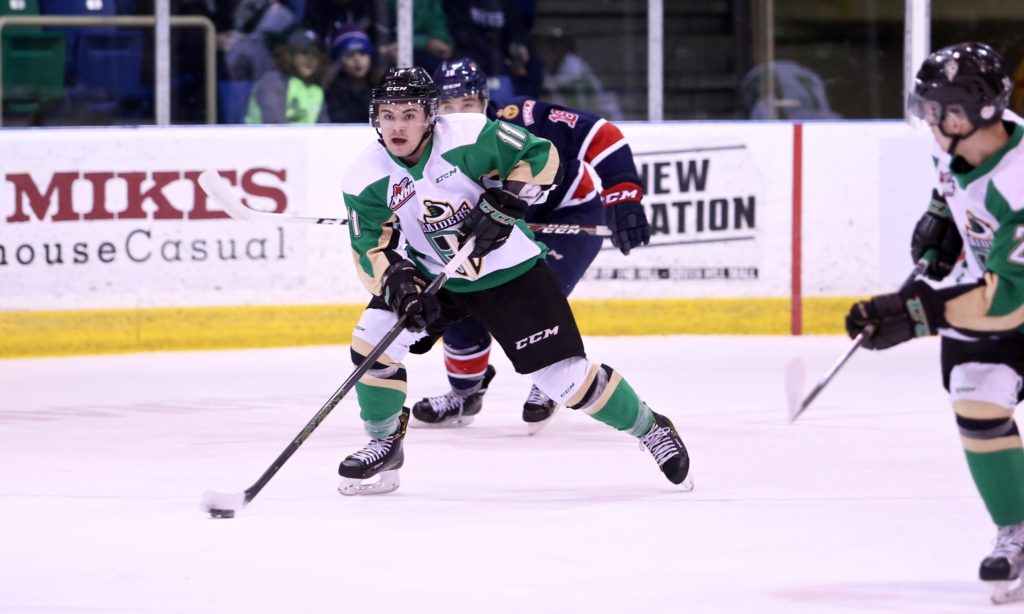 The Raiders jumped all over starting goaltender Kurtis Chapman and the Pats in the first period. Carson Miller picked the corner at the 6:24 mark to give the Raiders a 1-0 lead. One minute later, Curtis Miske elected to keep on a two-on-one rush and beat Chapman to increase the Raiders’ lead. With 5:39 to play, Miller notched his second of the game when he was left all alone in front to give his side a three-goal advantage. Then with 1:28 to play, Jordy Stallard found the back of the net on the power play to give the Raiders a 4-0 lead after 20 minutes.

In the second, the Pats answered. Bryan Lockner scored 17 seconds in to get the home team on the board. Jeff de Wit and Dawson Leedahl also beat Nicholas Sanders in the second period to make it a 4-3 game after two.

The Raiders restored their two-goal lead 6:43 into the third. Parker Kelly forced a shorthanded turnover and blasted a slap shot past goaltender Max Paddock, who took over in goal in the second period. A minute later, Nick Henry scored on a two-man advantage to make it a 5-4 game. Spencer Moe again restored the Raiders’ two-goal advantage, snapping a bar-down wrister past Paddock. Jake Leschyshyn tipped one past Sanders to make it a one-goal game again. Then with 8.5 seconds remaining, Adam Brooks wired one past Sanders to send it to overtime.

In the extra frame, Brooks completed the comeback by beating Sanders on the short side at the 18 second mark.

Sanders made 29 saves in a losing effort for the Raiders. Chapman, the Pats’ starter, made nine saves in the first period. From there, Max Paddock stopped 13 of 15 shots faced to earn the win.

The two teams meet again on Sunday afternoon in Prince Albert to close out the home-and-home series. Puck drop at the Art Hauser Centre is 4 p.m. Kids wearing their minor hockey jerseys will get into the game for free with the purchase of an adult ticket. Tickets are available here, the box office at the Art Hauser Centre or by calling 306-764-5348.