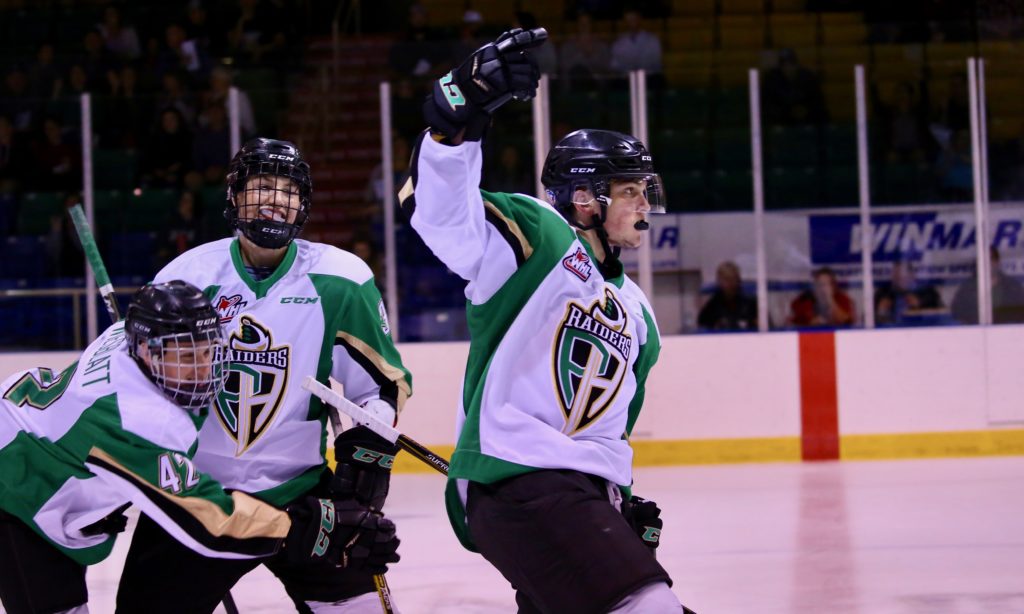 Regina, SK – Overage forward Devon Skoleski scored the lone goal of the shootout to give the Prince Albert Raiders a 3-2 win over the Regina Pats at the Brandt Centre on Friday night.

Skoleski, who was also making his pre-season debut, ended the shootout in the eighth round by beating Pats goaltender Tyler Brown.

After three power-play attempts, the Raiders opened the scoring with 3:55 remaining in the first period. Nikita Krivokrasov tallied his second of the pre-season to give the Raiders the lead.

Justin Nachbaur gave the Raiders a 2-0 lead at the 8:56 mark of the second, scoring his first of the pre-season.

The physicality picked up in the second half of the period. First, Cody Paivarinta and Matt Bradley dropped the gloves. Then, in two separate fights during the same stoppage, Tyler Lowe fought Wyatt Sloboshan and Drew Warkentine squared off with Bryce Platt.

Out of that ruckus, the Raiders ended up shorthanded and the Pats took advantage. Jeff de Wit scored to cut the Raiders’ lead to 2-1 with 5:25 to play in the period.

Just 38 seconds into the third, Koby Morrisseau finished off a passing play to make it a 2-2 game. After the goal, Nachbaur was given a five-minute major for charging and a game misconduct. However, the Raiders killed it off.

The rest of the third period was scoreless, sending the game into overtime. After a back-and-forth overtime period solved nothing, the game went to a shootout. Curtis Meger, who took over for Nicholas Sanders midway through the second period, stood his ground in the shootout by stopping all eight Regina shooters. Meger finished the game with 19 saves, not including the shootout, to earn the win.

The Raiders wrap up the WHL Pre-season tomorrow night when they host the Regina Pats in the second half of a home-and-home at the Art Hauser Centre. Puck drop is 7 p.m. Tickets are $10 for adults and $5 for children.

The 2017-18 WHL Regular Season begins on Friday, September 22 when the Raiders host the Moose Jaw Warriors. Game time is 7 p.m. Single game tickets are available now at the Raider Office or online.