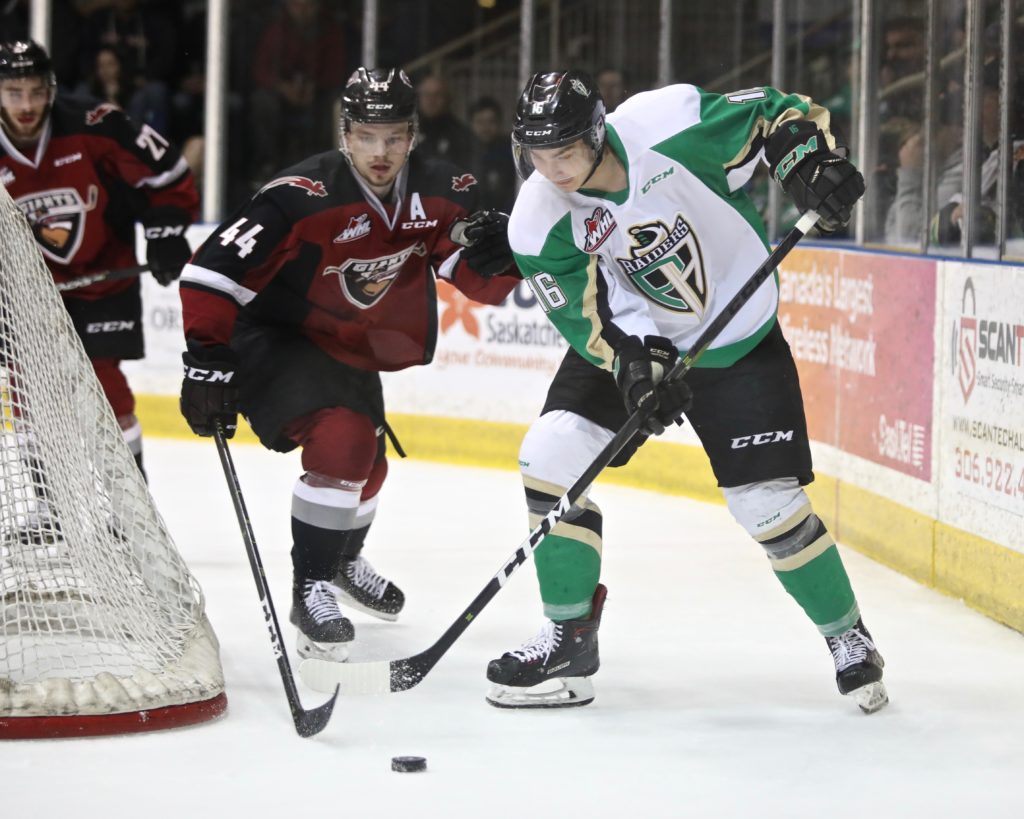 Prince Albert, SK – The Prince Albert Raiders weren’t able to complete the comeback in a 5-4 loss to the Vancouver Giants in Game 1 of the 2019 Rogers WHL Championship Series on Friday night at the Art Hauser Centre.

Dante Hannoun had a goal and an assist in the loss for the Raiders, while Parker Kelly chipped in two assists. Dawson Holt scored twice for the Giants with Jared Dmytriw adding a goal and two helpers.

The Raiders trail the best-of-seven series 1-0.

The Giants got out to a quick start in the game with their power play. With Noah Gregor and Parker Kelly in the box, Dylan Plouffe buried a one-timer to give Vancouver a 1-0 lead 4:20 into the contest.

Less than two minutes later, Vancouver struck again just after the penalty expired. Dmytriw’s shot went wide of the goal, but the rebound went off the endboards and onto the stick of Holt who scored his sixth of the playoffs at the 6:06 mark, giving the Giants a 2-0 lead.

Early in the second, the Raiders cut the lead in half with a power-play goal of their own. Brett Leason’s shot from the left faceoff circle got through David Tendeck for his sixth of the playoffs, making it a 2-1 game 3:20 into the middle frame.

Vancouver restored its two-goal lead about two minutes later. Dmytriw skated through the neutral zone and fired a wrist shot past Ian Scott from the top of the slot for his eighth of the post-season at the 5:13 mark to put the Giants up 3-1.

About a minute later, Gregor got the goal back. Zack Hayes sent a stretch pass up to Kelly, who found the San Jose Sharks prospect coming off the bench and cutting to the net. Gregor was sent in alone on a partial breakaway and snapped his eighth of the playoffs past Tendeck to bring the Raiders back within one.

With 3:15 to play in the second, Hannoun tied the game for the Raiders. Tendeck stopped Kelly’s initial shot, but Hannoun was able to knock the puck down in front of the net and bat it past the Giants netminder for this 10th goal of the post-season, levelling the score at 3-3.

Before the end of the frame, the Giants struck twice in 14 seconds to take a two-goal lead after two periods. Using a late power play, Yannik Valenti stepped into a one-timer with 31 seconds to go in the frame. Then, Holt threw a puck on goal from the corner that got through Scott with 17 seconds to play in the period, giving Vancouver a 5-3 advantage.

The Raiders cut the lead in half 2:50 into the third period. Jeremy Masella got the puck at the blueline, skated across the zone and down into the far corner. He was able to get the edge and cut to the goal, sliding the puck through Tendeck’s five-hole for his first career goal in the WHL Playoffs.

A late Raiders’ push was derailed by a penalty called with 3:28 remaining. After they killed it off and pulled the goalie, Tendeck turned aside a few late chances by the Raiders’ offence in the final minute.

Scott finished the game with 21 saves in the loss. Tendeck stopped 25 shots to earn the win for the Giants.

The Raiders will try to even up the 2019 Rogers WHL Championship Series in Game 2 on Saturday night at the Art Hauser Centre. Puck drop is 7 p.m.