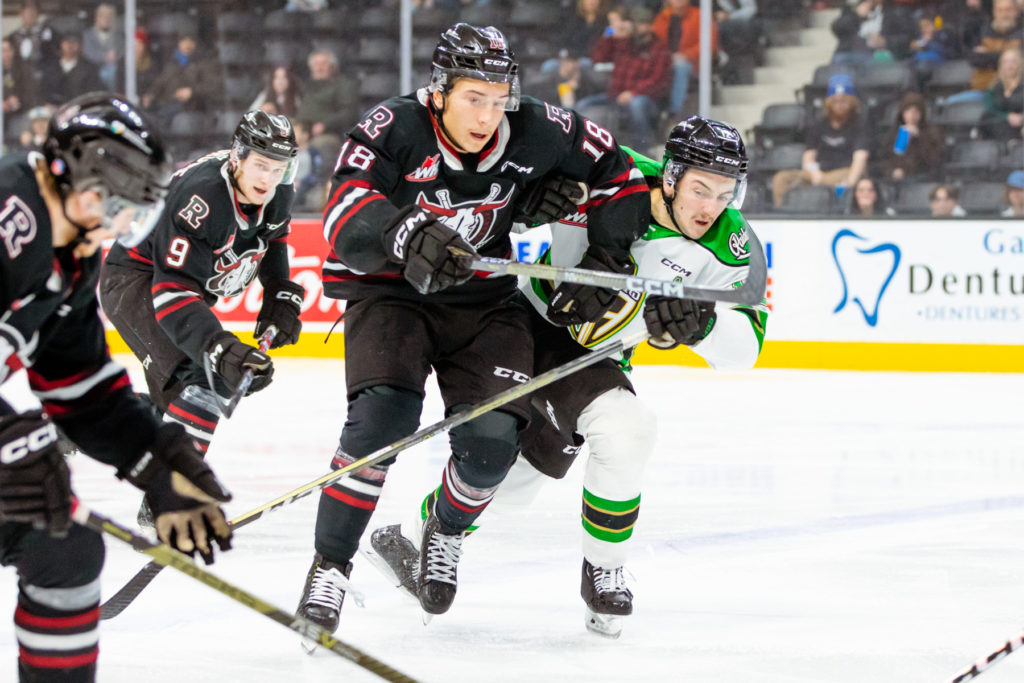 The Prince Albert Raiders saw their four game winning streak come to an end on Saturday night, as they fell 6-1 to the Rebels in Red Deer. The loss dropped the Raiders to 9-13-2-0 on the season.

The Rebels broke the ice with 9:18 to go in the first period on their second powerplay of the game. Red Deer captain Jayden Grubbe sent a pass from the point near the crease for Kalan Lind, who sent a no look pass between his legs to Kai Uchacz. Wide open near the left circle, Uchacz fired a one timer past Raiders starter Max Hildebrand, opening the scoring with his 18th goal of the season.

Red Deer doubled their lead with 6:01 left in the first period. Working low to the left corner, Ollie Josephson threw a pass in front for Jace Isley, who came crashing towards the crease. Isley slammed his stick on the ice and neatly deflected a backhand redirection past Hildebrand to give the Rebels a 2-0 lead with his 14th goal of the season. On top of that, Red Deer held a 14-2 advantage in shots to that point in the game.

That lead became 3-0 with less than two minutes left in the first, and the Rebels found their third goal of the contest right after killing off a penalty. Coming out of the penalty box, Frantisek Formanek was given a lead feed from Talon Brigley. In all alone, Formanek froze Hildebrand, and tucked a shot over the PA netminder, who ended up on his stomach trying to make the save. Formanek’s fifth goal of the season was a huge momentum goal for the Rebels after the penalty kill, as they went up by a trio.

3-0 would be the lead for the Rebels after the opening 20 minutes, with the home side also leading in shots 15-8.

No goals were scored in the second period until the 16:05 mark of the middle frame. Arjun Bawa took a feed from Jace Weir in tight and buried his first Western Hockey League goal to put the Rebels up 4-0.

The Rebels added a dagger of a goal with 13 seconds left in the second period. Kalan Lind managed to barely trickle a puck over the goal line for his second point of the night past a sprawling Hildebrand. Lind’s fifth goal of the season gave Red Deer a 5-0 lead heading into the third period, while the team also led in shots 28-13.

It took just 48 seconds for the Rebels to add another goal in the third period. Jhett Larson cashed in on a chance, scoring his ninth goal of the season. The goal to make it 6-0 chased Hildebrand out of the game, as Tikhon Chaika came in as his replacement.

The lone bright spot on the scoresheet for the Raiders came with 9:06 left in the third period, as Keaton Sorensen scored in his hometown on the powerplay. Sloan Stanick picked up his fifth assist in two games, with Carson Latimer picking up the secondary, as Prince Albert cut the lead to 6-1.

That’s as close as the green and gold would get, however, as the Rebels handed the Raiders a 6-1 loss, dropping them to 1-1-0-0 on their five game road trip.

Next up for Prince Albert is a trip to Medicine Hat for a meeting with the Tigers on Sunday night. Puck drop is 5pm.